You Don't Really Want To Catch Me - now playing

Is it just me, or is President Trump starting these White House #coronavirus briefings later and later? The reason I ask is that my alcohol use as the night progresses past 5pm (after working from home all day in a very uncomfortable chair) may be affecting my cognition (or consciousness...)

Take yesterday's briefing for example. I read this morning that Trump played a video of GM producing ventilators (and MSNBC cut away because they 'hadn't screened in advance' - true story) - but that is not how I remember it going... but I might have nodded off... who's to say?

President Trump plays Tom Hanks new movie, You Don't Really Want To Catch Me. This is a sequel to Catch Me If You Can from 2002 starring Hanks and Leonardo Dicaprio. The original movie was based on a true story with Dicaprio playing con man Frank Abagnale. (spoiler alert) Yes, this is the movie Hanks was filming when he caught the virus) 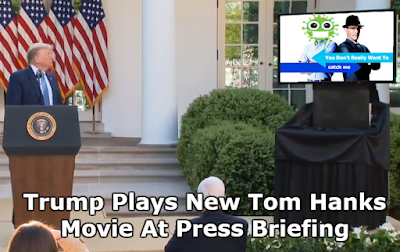 Well, Hanks is back as agent Carl Hanratty, but Dicaprio is replaced by COVID-19, an unpopular germ but still polls better than Dicaprio.

PLOT: Strangely, this sequel follows the plot of the original to a 'T', except the seasoned FBI agent (played by Hanks) channels President Trump. 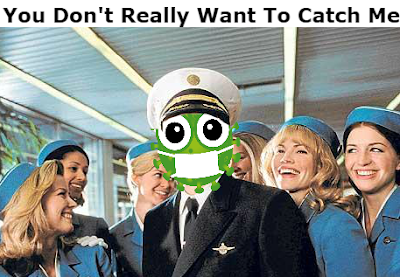 The virus is played by a novel newcomer which was loosed from a Chinese lab in Wuhan, and manages to forge $Trillions of dollars' worth of stimulus checks while posing as a Pan Am pilot, a doctor, and a legal prosecutor.

Leonardo Dicaprio makes a brief cameo towards the end of the film and consulted for help. Let's listen in... 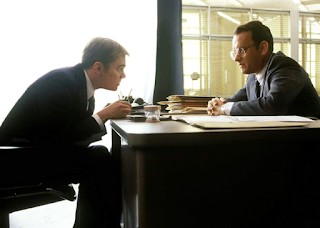 Carl Hanratty:  No. I'm talking about China. But we're smarter. We'll beat the virus. We'll defeat the leftist in the media (and the ones loose in the wild). And we'll beat China.