IN TODAY'S EPISODE OF "DAYS OF OUR QUARANTINED LIVES" (spoiler alert) -

RECAP: In yesterday's show, President Trump started the White House coronavirus press briefing off by playing video clips  of the press and mainstream media reporters embarrassing themselves again and again with their initial downplaying of the outbreak from just a few weeks ago. Since this directly contradicts their current lying narratives, CNN and the rest of the Fake News media cut away from the coverage.

TODAY: While their networks can keep the truth from their drooling audience, the President decides to use his ultimate authority with the reporters in the room by having the exits temporarily chained, the wise guys and gals in the press corp bound to their chairs and gagged and forced to watch Clips Of The Apprentice - Season 2 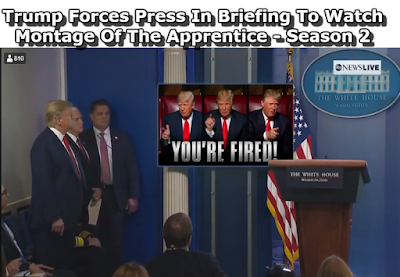 TRUMP: "We could give you hundreds of clips just like that. We have them," Trump told reporters after the video finished. "It's very sad when people write false stories."
Posted by DaBlade at 6:56 AM