April in the D

As far as I'm concerned, the NHL playoffs began just in the Nick Lidstrom of time, as I am suffering from what I will call "Hillary/Obama drama overload fatigue" syndrome. The Detroit Red Wings beat The Nashville Predators 3-1. Zetterberg scores two and Johan "The mule" Franzen scored the other. Or, as Detroit News sports writer Bob Wojnowski puts it, "Swede to shining Swede". Yes MD, I am aware that Nabokov looked scary good in net for the Sharks last night with several highlight reel saves. Sharks and Wings will be a great matchup (fingers crossed).

Let's not forget to give a shout out to Notre Dame for their upset victory over the mighty Michigan Wolverines in last night's Frozen Four hockey semi. Notre Dame will face Boston College for the championship Saturday night at the Pepsi Center.
GO IRISH!

Why the Swede and Irish stuff Blade? 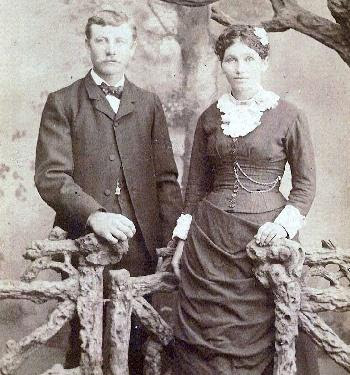 Pictured: My Great Grandparents Nils and Ida. Great-Grandpa Nils came to America in 1881 from Ostergotland, Sweden at the age of 21 and found and married Ida in 1888. Irish blood added later on my mom's side. I don't know if Nils played hockey, but I do know that a couple of his great-great grandkids do.
Posted by DaBlade at 7:57 AM