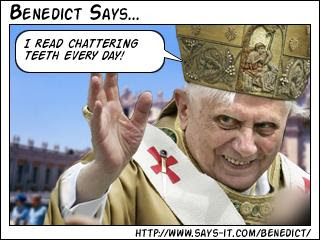 Pope Benedict XVI is paying the United States a historic 5-day visit starting Tuesday. His Holinesses itinerary includes a meeting with President Bush, a visit to WTC's "Ground Zero", holding Masses in Washington, D.C. and New York, and addressing Catholic university presidents. The Pope's highly visible visit allows the opportunity to speak with not just American Catholics like myself, but with Americans in general, as well as an International audience.

I highly recommend Peggy Noonan's recent "much linked to" article titled, Something Beautiful Has Begun. In it, she paraphrases the Pope's "controversial" Regensburg address delivered in 2006 this way:

There he traced and limned some of the development of Christianity, but he turned first to Islam. Faith in God does not justify violence, he said. "The right use of reason" prompts us to understand that violence is incompatible with the nature of God, and the nature, therefore, of the soul. God, he quotes an ancient Byzantine ruler, "is not pleased by blood," and "not acting reasonably is contrary to God's nature." More: "To convince a reasonable soul, one does not need a strong arm." This is a message for our time, and a courageous one, too. (The speech was followed by riots and by Osama bin Laden's charge that the pope was starting a new "crusade.")

Don't forget that Sister Leonella Sgorbati was murdered in response to this address by muslim killers in Somalia.

The Pope reminds Catholics that applied faith values on abortion, euthanasia and marriage are "not negotiable." Hopefully as a result of this visit, Christian values will gain ground on the insidious creep of secularism in the U.S. (as well as an additional conversion or two, like that of Magdi Allam, who converted to Catholicism from Islam and was baptised by Pope Benedict XVI on Easter).

No surprise, security measures will be very high for Pope Benedict's visit. May he be kept safe and well, and may his message resonate.
Posted by DaBlade at 9:19 AM