Barack Obama's crazy "like a drunk uncle to me" Reverend Jeremiah Wright was at it again. Just when you thought that Obama was successful in putting a muzzel on him, he spews racist hate speech. This time the good reverend was talking smack at a funeral of all places. 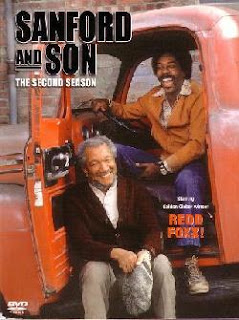 It just hit me that Jeremiah Wright reminds me of Fred G. Sanford as played by Redd Foxx in the 70's TV sitcom, Sanford and Son. I tuned in every week to watch the cantankerous but loveable junkman Fred cause all sorts of hijinks and trouble for his son Lamont, played by Demond Wilson. Fred was always getting himself, and ultimately Lamont, into some sort of pickle. It was also not unusual for Fred to spout some anti-white rhetoric in each episode. It was delivered in the "Archie Bunker" kind of way that just made you laugh. Not that racism in any form is funny, but you laughed because Fred Sanford and Archie Bunker were very funny men, and these sitcoms exposed racism for it's true nature. But I digress. Back to Jeremiah Wright.

Jeremiah Wright's resemblance to Fred Sanford is uncanny, now that I think about it. Following through with this analogy, Barack Obama would be the reverend's Lamont. See the correlation? The perfect pair to cast if ever a remake of Sanford and Son is in the works. Wright says something crude and offensive and all eyes fall on Obama for a response. Barack eloquently apologizes for Wright's hate-speech without dissassociating himself from Wright. The press fawns all over Obama and he is given a pass until the next episode. Wright again pops up somewhere and says something else outrageous, and again Lamont, errr, Obama is left with the cleanup. The cycle continues. Hate-speech/response. Hilarity ensues. In fact, all we are missing in the real world is a laugh track. You know, the canned laughter used in almost all of the TV sitcoms to let you know that what you are watching is "teh funeh". Therefore I've decided to try it here.

We return to the Rev. Wright in an episode titled, "The funeral eulogy":

Rev. Wright stands at the pulpit and begins to give the "eulogy" for a former appellate judge and congregant of Trinity United Church of Christ. Does he stand before the mourners, many of whom I'm guessing were dressed and veiled in black, to solemly speak about the judge and the righteous life he led? Or did the Rev. Wright read a bible verse to give comfort to friends and family? No. He takes this occasion to blast America’s founding fathers for slavery and white supremacy and calls Thomas Jefferson a pedophile.
[LAUGH TRACK]

See? Doesn't that sound better? Is there really a more appropriate response to Wright than laughing at him? Let's continue with the funeral. It seems the good reverend was just getting warmed up. I don't know about you, but every funeral I have ever attended, I found myself sitting in the pew silently cursing the Fox news channel...

Rev. Wright is one crazy old dude, but the laugh track makes me feel that he is comical and loveable in his lunacy and prejudice, just like Sanford or Bunker, don't you think? Let's review some clips from last season's episodes...

“We have supported state terrorism against the Palestinians and black South Africans, and now we are indignant because the stuff we have done overseas is now brought right back to our own front yards. America’s chickens are coming home to roost.”
[LAUGH TRACK]
(Me on coach) Hey honey, Wright just blamed us for 9/11. This guy's a hoot!

“The government gives them the drugs, builds bigger prisons, passes a three-strike law and then wants us to sing ‘God Bless America.’ No, no, no, God damn America, that’s in the Bible for killing innocent people. God damn America for treating our citizens as less than human. God damn America for as long as she acts like she is God and she is supreme.”
[LAUGH TRACK]
(Me again) Honey, can you grab the bible on the bookshelf cuz I think I missed a chapter. That Wright is a cutup!

More Wright's "best of"...
"In the 21st century, white America got a wake-up call after 9/11/01. White America and the western world came to realize that people of color had not gone away..."

“Hillary is married to Bill, and Bill has been good to us. No he ain’t! Bill did us, just like he did Monica Lewinsky. He was riding dirty.”
[LAUGH TRACK]

Whew! That seemed to work for me. I feel much better. So much so that I plan on imagining the laugh track after every news clip I read or watch on TV involving not just the yahoo Rev. Wright, but all of the democrats. I will try laughing after every Clinton lie (talk about laugh lines). I will laugh after every arrogant, elitist, and intellectually vacant utterance of the empty suit that is Obama. (my jaw hurts from just thinking about all of this laughing!).

Laughter really is the best medicine. It sure beats a close examination of what these liberal politicians truly believe and want to inflict upon this country if given the chance. That would just make you want to cry. So let me leave you with this instead... 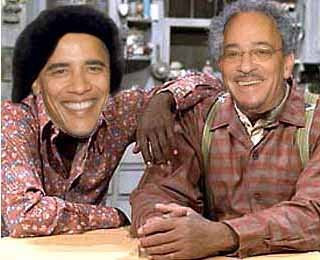