Big day around the Chattering Teeth Studios, as our middle son (of 3) is getting married this afternoon. It is the first wedding of two this year, as our oldest is engaged to be married in December.

We had the rehearsal dinner last night, and as tradition dictates, The father of the groom gave a speech and a toast. I am not going to recreate my remarks here, but trust me, I had a couple real good laugh lines as well as some tears, and that was not just from the folks I saw looking at their wrist watches and wondering when I was gonna "wrap it up".

I will tell you about the story when my boy proposed to his soon-to-be bride, and how honored and moved his mother and I were that he allowed us to witness this special moment in their lives. I told our guests about how my wife and I knew of Joe's plans to propose, he just didn't share the timing with us.

You see, our boy had told us of his secret plans to propose on a hot air balloon ride. I know... How cool, right? Well, as fate would have it, the first scheduled date was canceled by the pilot due to weather conditions. Apparently, they won't take those things up in less than ideal conditions, let alone a big and brewing storm. He rescheduled for the next opening he could make happen a week later, and guess what? Canceled again. He gave it a third try (and maybe a fourth, I don't remember) but the hot air balloon ride was canceled on him every try.

Keep in mind that maybe a month or so had gone by AFTER Joe had decided to propose, a veritable LIFETIME when a man has made the determination to propose to his one true love. I just assume that he was tired of being held captive by fickle winds and spontaneously went to his knee that day. In any case, I remember the scene became a little blurry after that, as my very manly eyes started inexplicably secreting an unknown watery substance that ran down my cheeks.

The love birds did get their balloon ride about 6 or 8 weeks ago. They loved it!

There is a lesson in that story. Life doesn't always go according to your plans. Sometimes a rain storm can ruin your picnic. Sometimes, the tempest is so severe it can tear you at your foundations and drop you to your knees.

The thing I am most proud of with this young couple is the evidence of their deep and abiding faith. That can't be easy in today's culture, where up is down and where belief in God is ridiculed.

The good news is, if you put Him first in all things, He will be your ballast in those unexpected storms of life. He will keep you anchored firmly to the ground until the storms pass, and the clouds part and the sun comes out.

It may be in His time, but keep God first and you will always get your balloon ride. 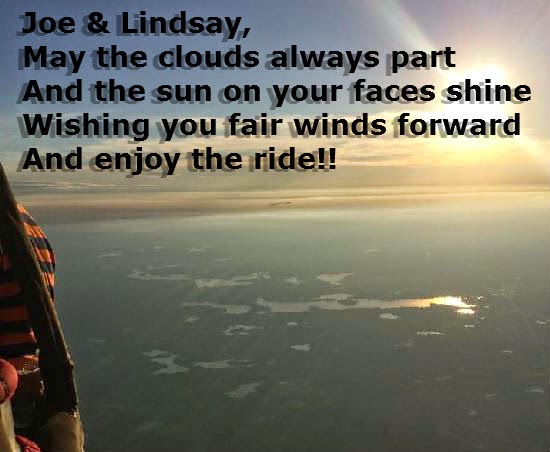