De Oppresso Liber is Latin for to free from oppression and is the motto of Special Forces. I think we should adopt it for our current oppression. It sounds way better than "Olly Olly Oxen Free!!!"

Last week, Michigan Governor Gretchen Whitmer ordered all big box stores to cordon off their garden centers and plant nurseries, blocking customers from shopping in those sections - “If you're not buying food or medicine or other essential items, you should not be going to the store,” Whitmer said when announcing her order.

More recently, she called access to abortion during the coronavirus pandemic "life-sustaining." 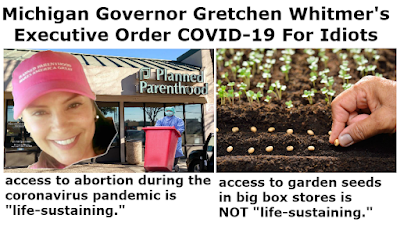 "Temporary requirement to suspend activities that are not necessary to sustain or protect life."

UPDATE: Michigan Gov. Whitmer says she hopes to relax lockdown by May 1 after and four sheriffs said they won't enforce her rules because they 'overstep' and protests to protect America's 'civil liberties' erupt

*Michigan's Gov. Gretchen Whitmer said on Good Morning America that she hoped to reopen by May 1
*It came after protests in Lansing over people's inability to earn a living and after backlash from police
*Four sheriffs said they would not strictly enforce her lockdown rules and that they were 'vague'
*It comes as South Dakota Gov. Krisit Noem vowed to keep her state open despite the public health risk
*She said people were being forced to 'give up their liberties for a little bit of security' despite there being exponential growth in cases in South Dakota
*Many say they are willing to risk catching the virus because they cannot go on any longer without work