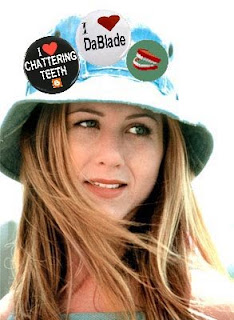 Some days there are just too many juicy internets tidbits and I can't decide what is worthy to blog. And then I'll think of the Seinfeld episode where George Costanza is pitching "the show about nothing" to Jerry.

GEORGE: It's about nothing.
JERRY: No story?
GEORGE: No forget the story.
JERRY: You've got to have a story.
GEORGE: Who says you gotta have a story? Remember when we were waiting for, for that table in that Chinese restaurant that time? That could be a TV show.

And then I'll read a headline like Boy, 4, shoots babysitter for stepping on his foot and think, "that could be a blog." After all, this is a blog about nothing, which kinda takes the pressure off.

JACKSON, Ohio – Police say an angry 4-year-old Ohio boy grabbed a gun from a closet and shot his baby sitter... BLAH BLAH BLAH BLAH... The child has not been charged.

Well I should hope not! Sounds like a righteous shooting to me. "Some men just need killin'," babbled baby Charles Goodnight.

Or how about story idea two:
'Nitro' From 'American Gladiators:' Steroids Gave Me 'Man Boobs,'
"Man boobs, breast-chesticles is what they're called on the street. Gynecomastia is the scientific name. No matter what you call it, I [had] it..."
To this I say "American Gladiator?" More like "Amammary Gladbagsiator". *pause*
Get it? *pause* Amammary Gladbagsiator. Go ahead. Sound it out. That's teh funneh. And somewhere in cyberspace, I hear George Costanza say "Yep, that could be a blog."

Or I can stick with something political.
So will Raymond "Ironside" Burr be seated as the next senator from Illinois, or will the democrats play the handicapped wheel chair card? What's that you say? Blagoje-biotch tapped "Roland Burris", not "Raymond Burr", and the dems are playing the race card again, not the wheelchair card?

Close enough! Top dems are stating that Burris will not be admitted into the senate chamber on opening day. Sounds like they are setting up a gauntlet of muscle! I just hope that don't use Harry Reid as their middle linebacker. You'd have better luck with Feinstein stuffing the run and Barbara Boxer as free safety.

Or we could go with the personal aside:
If you're like me, if you've heard it once, you've heard it a thousand times - "DaBlade. Quit playing with your widgets!". That's "blog widgets" people. I've been experimenting with them. (yes, I know I'm behind the times and most of you, but I'll get there). Widgets, I've learned, are sort of like BLOG BLING, or blog flair. Speaking of which, wasn't that Jennifer Anistan wearing my flair?

Take my first poll for example. So far, a whopping 700,000 votes, with the overwhelming majority of voters begging me to continue (statistical stats stuff: One Chattering Teeth poll voter represents 100,000 Americans). I even have a detractor or two! It is what keeps me going!

So in conclusion:
Today's blog has covered a lot of ground, yet when boiled down to it's essence, was about absolutely nothing at all. Just the way I like it.

*BUZZZ* I gotta run. That's the clothes dryer and my man-bra is ready. See ya tomorrow, when I'm sure I will have nothing more to say.
Posted by DaBlade at 6:27 AM