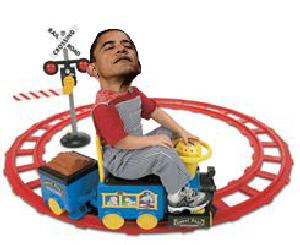 Pictured: The messiah-elect's train ride from Philadelphia to Washington (or at least how I imagine it, as I haven't had the time nor the stomach to watch any coverage of this approaching slow motion train wreck of an administration).

Obamamania. I can't watch. I will read bits and pieces (with numerous breaks in between), but I will not be able to watch. With the wall to wall coverage being planned for the messiah-elect's inauguration, it will take some effort to avoid.

Here's what I don't get...
First, the homeless are thrown out to make way for The One and his entourage. Now the prostitutes are being told to zip it and keep it zipped with the declaration of a prostitute free zone. Why is Obama turning his back on the voting blocs and various coalitions that got him elected? With so many democrats coalescing in one place, what would you have them do for fun now? Were Bill Clinton and Barney Frank informed? No homeless or prostitutes allowed at a democrat gathering is about as stupid as a smoking ban in a cigar shop.

I find it ironic that Obama invokes Abraham Lincoln. Sure, they both hail from Illinois, and both apparently enjoyed train rides. But it was the white Republican guy who ended slavery, and the black Democrat will bring it back in the form of the big government master to a degree we have never witnessed before.
Posted by DaBlade at 7:21 AM