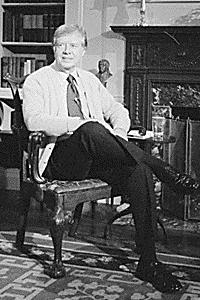 Jimmy "Mister Rogers" Carter's answer to the energy crisis in 1977 was for all Americans to wear a cardigan sweater and to turn down the thermostat. A tad bit more effective, maybe, then to just mandate proper tire inflation as the official energy policy. But still - mandatory cardigan-wear? What if folks had actually listened to the peanut farmer on this? How scary would that be?

RESIDENTS of a model housing estate bankrolled by Hollywood celebrities and hand-built by Jimmy Carter, the former US president, are complaining that it is falling apart... One resident said her children were suffering from skin complaints. “The intentions are good, but when the politicians and big-shot stars have left we’re stuck with the consequences. This house looks pretty but inside it either stinks or sweats,” she said.

As blogger babe Michelle Malkin stated on this subject, "The road to hell is paved with good intentions". Listen people. I don't care how destitute or in need of shelter I may become. Jimmy Carter is not welcome to my neighborhood, let alone welcome to build my home. Now if I wanted tips on growing peanuts in my victory garden, I might pick up the phone. Hey, no knock on Jimmy. We all have our unique talents. Apparently, Carter's doesn't include building houses (or leading the free world, as we so painfully found out).


"This house looks pretty but inside it either stinks or sweats".

Stinky and sweaty? No, that wasn't Harry Reid describing those pesky tourists again. That statement also describes the good intentions of liberalism. Doesn't it sound shiny and spiffy on the outside? Make love, not war. Peace on erf. Elimination of poverty by simply taxing "the rich". It falls apart in it's implementation, just like a Carter-built home.

As usual, I believe I have come up with a solution for those unfortunate folks with the skin conditions arising from their dilapidated Carter-built homes. (and funny thing is, I owe it to Jimmy!).

Step one: First things first, let's deal with that nasty rash. Rub some peanut-oil on the affected areas and your skin will be clear and vibrant in no time at all! (either that, or an unlucky few will suffer a violent peanut allergy, in which case they won't necessarily care about that silly rash anymore.)

Step two: Let's deal with the crumbling house. Getting a little drafty in there is it? Well put on a damn sweater! Whaddya want fer nuttin!? Think you're smarter than a president? 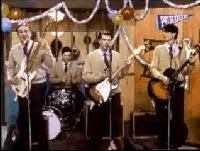 Pictured:
Weezer performs Buddy Holly, demonstrating what we would look like if mandatory cardigan attire becomes law. In a weird twist, they wrote about the chaos that would ensue from such an unjust law in their...