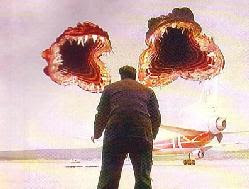 Scientists Not So Sure 'Doomsday Machine' Won't Destroy World

I read that headline and at first thought the article was about an analysis of Obama's "stimulus package". Then I read the article. Now I'm sure of it.

Actually, it is about the Large Hadron Collider (LHC), a huge particle-smashing machine set to be fired up this summer. Three physicists have pored over the math equations regarding the LHC's potential for creating small black holes, and have determined that "Math is hard".

Wait, I'm sorry. I got these three physicists confused with my Teen Talk Barbie's findings. Though I have to disagree with her on the “I love shopping!” bit. *puts Barbie back in drawer*

Where were we? Oh yeah, the mathmageniuses stated that those microscopic black holes "won't simply evaporate in a millisecond as had previously been predicted". Instead, these mini holes could exist for... *please pause while the physicist completes his equation at the chalk board*... "six times five is thirty one, carry the three... Six, seven, eight, and nine - Just one more, I'm doing fine. The last little finger is number ten. Now I'll count them all again..."

ANSWER: "more than a second."

Under such long-lived conditions, it becomes a race between how fast a black hole can decay — and how fast it can gobble up matter to grow bigger and prevent itself from decaying.

The three Stooges physicists do state that "it does not seem possible" these black holes will grow "to catastrophic size". So, nothing to worry about then? FoxNews.com points out "a few other things that didn't seem possible once," meaning that scientists have been horribly wrong before. Thank goodness we have Al Gore, inventor of the internets and global warmings, to be the final arbiter on this. Watch for his sequel book and slideshow presentation for Earth in the Lurch 2 this summer. If Al is worried, we will all be able to breath a sigh of relief.

In Conclusion
Three physicists: "I can count, want to see? Here's my fingers -- one, two, three."
Barbie: “Will we ever have enough clothes?”
DaBlade: Under Obama's "stimulus package", government will have no problem gobbling up tax dollars to grow bigger. That large sucking sound is not the LHC, but the accelerated decaying of the U.S. economy under Obama's trillion dollar giveaways.
Posted by DaBlade at 7:22 AM