There is Fluff in the Stimulus 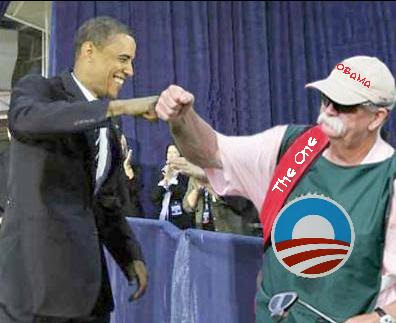 There had been a question as to whether or not Obama would be allowed to keep his "beloved BlackBerry" until last week, when White House spokesman Robert Gibbs announced a compromise had been reached.

Obama complied, and is now using a super-secure BlackBerry with a new e-mail address (although by now I'm sure he has Ackmadeenadude, Chavez, and Hamas in his "Fav Five").

"The president has a BlackBerry through a compromise that allows him to stay in touch with senior staff and a small group of personal friends," Gibbs said.

See what I mean? 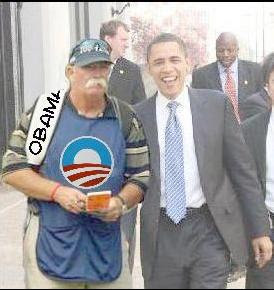 Chattering Teeth has learned made up that part of this cell phone security compromise involves Obama's insistence on the creation of a new post of "First Caddy". Obama has tapped Mike 'Fluff' Cowan to carry his cell phone.

Mike 'Fluff' Cowan gained celebrity status as the gruff and fluffy 'stached golf caddy for Tiger Woods for two and a half years. It's rumored that Tiger fired Fluff in 1999 because he was getting too big for his britches. (This is the same reason Eddie Van Halen fired David Lee Roth and maybe why Fluff has never auditioned for vocals with the band). Prior to his work with Tiger, Fluff caddied for Peter Jacobsen, and most recently for Jim Furyk.

"Fluff has been great to work with so far," gushed Obama. "When we are on the move, Fluff is always checking the cell phone signal and alerts me when we are down to three bars. An emergency call is made for the immediate construction of a new cell tower to increase coverage and boost my signal. No more dropped calls for me, and additional, albeit unnecessary, infrastructure for you".

"I think I'm gaining his trust," Fluff stated of Obama. "Yesterday, he asked me to carry 'The Basketball' while he tied his shoe, and he hands me the briefcase carrying nuclear launch codes". I shook it and said, "I thought they called this 'The Football'." "We had a good laugh over that one!," said Fluff.

White House spokesman Robert Gibbs states that President Obama is very happy with Fluff's performance. "He keeps the phone dry when it's raining, wiping it down with his towel after the president hands it back to him. Fluff will give him advice on just about everything, from the stimulus package to the Sudoku puzzle the president is working on".

I guess we can be happy that NOT ALL of the trillion dollars is being wasted.
Posted by DaBlade at 7:09 AM