"...What does Mister Clinton think through the mouth of Mrs. Clinton?" 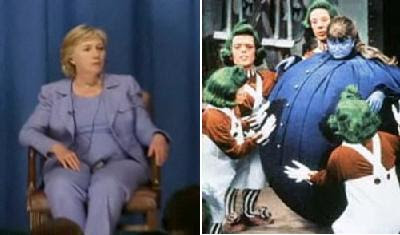 Meanwhile, Wild Bill Clinton is celebrating his August 19th 63rd birthday a little early in Las Vegas while the ball-and-chain channels him from the Congo.

Mr. Clinton is in Las Vegas on Monday as one of the marquee speakers at the National Clean Energy Summit, put together by Harry Reid of Nevada, the Senate majority leader. The event has drawn a pretty impressive turn-out, from former Vice President Al Gore to the wealthy oilman T. Boone Pickens.

But it became clear that something else was afoot in this sweltering desert city when some of Mr. Clinton’s friends – the kind who would appear not to have a particular interest or expertise in the kind of summit Mr. Reid has arranged – were spotted on the Vegas strip. 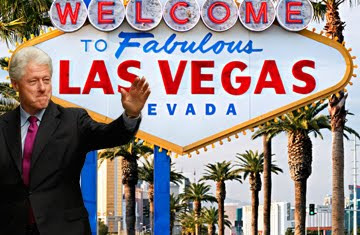 Harry Reid, T. Boone Pickens and Al Gore in a room full of global warming greenie weenies? Sounds like a party to me. Zzzzzzz *snore* I can almost hear Clinton whisper something like, "let's blow this taco stand and have some real fun boys!"

"One of Mr. Clinton’s friends said they were told that Mr. Gore was leaving town after today’s summit and would not be able to attend the night’s festivities."

Suuuure. You just know he begged his former boss if he could tag along. Wild Bill was probably thinking how tough it would be even for him to find willing hookers for the above crowd and just knew that Algore would be the straw that broke Lewinsky's back.
Posted by DaBlade at 7:39 AM