Depending on who you listen to (or what medications you are currently abusing), that's the date the world ends because (A)Planet X will collide with Earth, (B) of hyper-volcanic and earthquake activity (C) Bob Dylan will record a followup Christmas Album, (D) The re-election of Barack Hussein Obama (Mmm mmm mmm).

What's the significance to December 21, 2012, you ask? Well that just happens to be the date when the Mayan calendar ends. If I remember my history, the Mayans were indigenous peoples of South America a long time ago... maybe as much as decades ago. They were good at making clay pots and pyramids, but they sucked at making calendars.

No worries, per this:
According to Rosemary Joyce, a professor of anthropology at UC Berkeley, the Maya never predicted anything. The 2012 date is approximately when the ancient calendar would roll over, like the odometer on a car; it did not mean the end -- merely the start of a new cycle.

December 21, 2012 is also the subject of a Hollywood movie coming out next month. Nothing says "disaster" and "movie" like the name John Cusack. My point is, maybe all this paranoid talk is just some good ol' fashioned viral marketing. I might add that the Mayans also sucked at viral marketing, as evidenced by their societal collapse. 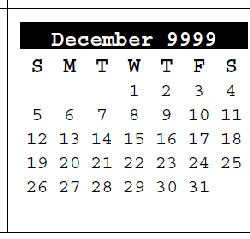 So in conclusion, the Mayan civilization did not have the internet (Algore had yet to invent it) and therefore they did not have access to myfreecalendarmaker.com which accurately predicts the end of days being December 31, 9999, as it inexplicably has no dates beyond this.

Now THAT'S SPOOKY!
Posted by DaBlade at 8:10 AM