The NYTimes recently ran a piece about a Flint urban farmer growing an Obama Victory garden in what they call "the toughest city in America". OK, they don't actually call it an Obama Victory Garden, but that's what this headline suggests: Amid Ruin of Flint, Seeing Hope in a Garden.

On one side of the fertile lot stands an abandoned house, stripped long ago for scrap. On the other side, another abandoned house, windows boarded, structure sagging. And diagonally across the street, two more abandoned houses, including one blackened by a fire maybe a year ago, maybe two.

When life gives you lemons, make lemonade... and If life gives your neighborhood "10 contiguous lots where a row of houses once stood," become a community garden organizer and grow some turnips or something.

No offense fella. I actually think what you are doing is pretty awesome. That is, assuming you are not one of them entramanureal "profit deal" capitalists, and instead you are spreading the collard greens around. 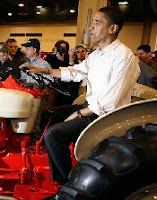 Any hint of snarkiness or sarcasm on my part (Moi?) is not aimed at the urban farmer here, but at what this once great city has become at the hands of the democrats and the union. These fields of Flint were already in the process of being plowed long before Obama jumped up into the seat of the First Tractor (a/k/a: The Village PTillager). His policies, however, will expedite the arrival of urban farming to a community near you, so sharpen up those green thumbs people.

I am also slightly jealous 'cuz my suburban neighborhood is behind the curve on this. It could be several months before my neighborhood has 10 contiguous abandoned and foreclosed lots to till.

No worries, I just remembered how many plants I used to be able to squeeze into a 10X10 foot plot of land. Granted, this was back in the late 70's when my gardening skills were honed to razor sharp point. My green thumb skillz have somewhat atrophied since.

HEY! I remember my dad took a picture of me on my "spread". Wait here while I look to see if I still have that... AHA! Enjoy! 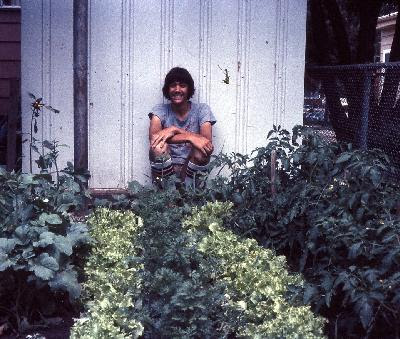 Notice the rows of leafy lettuce in the middle, surrounded by tomoto plants, carrots and onions. Notice also the knee-high striped tube socks and muscle T-shirt on this young stud. The crops produced in this 10X10 plot of land could feed my family through the winter in the new Obama economy.

My favorite Grandpa John story...
I don't remember exactly when my Grandpa John died, but it couldn't have been too many years after this picture was taken. But I do remember that he was always old while I was growing up. He had shock-white hair, walked very slowly and was hard of hearing (unless my Grandma Ruth was in the kitchen and whispering about him :)

Grandpa John also had hands the size of shovels, and I always knew that he must have been quite a physical speciman in his youth. He had been a farmer all his life, and I remember stories about huge farm lands in South Dakota that were lost in the great dust bowl... Even in my grandparents old age, they had a farm (mostly corn) of several acres... It was HUGE to my brothers and me, and I loved visiting after Sunday church. Grandma let us dig up our own potatos for dinner!

My point is, my grandpa knew what real farming was all about. That's why I will never forget the day he visited my farm plot (pictured above) that same summer. I remember him standing at the edge of this massive tangle of my organic children as I looked into his lined face for some kind of approval. He looked at my garden and then he looked at me, a small smile formed at the corners of his mouth as he simply said, "How do you find time to go to town?"
Posted by DaBlade at 7:24 AM