The President of the World Stuffed on Olympic Layup Attempt

Sung to the tune of Elvis Presley's - In The Ghetto

Obama says the Olympic committee "acted stupidly" in rejecting Chicago and insists they join him for a beer on the White House veranda to reconsider.

OBAMA: "We are still planning to host the 2016 Olympics, aaand I will fly back to Copenhagen (pause) to administer another dose of my rhetorical flourish. When the chips are down, I turn on my teleprompter aaaand speak in a hynoptic cadence (pause) thaaat compels folks to listen and bends them to my will. It has always worked before."

BLADE: Mr. President, what are you going to say to the obviously racist members of the OIC that you haven't already said on the first trip?

BLADE: What if this pitch doesn't work either?

OBAMA: Everyone knows thaaat Chicago will get the Olympics at some point. If the IOC members want Rahm to save them a good seat, they'll play ball.

BLADE: Mr. President, I don't know why more and more folks consider you an imbecilic and incompetent boob. You are obviously crazy like a fox sir.

Her name is Rio and she dances on the sand. 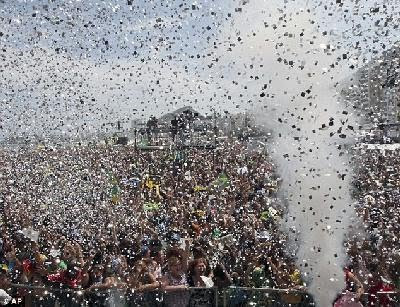 So in conclusion, here are the aforementioned videos side-by-side for your listening pleasure.