Donnie and Marcie - I remember them

It's known simply as "The Rock" to those of us who grew up in Flint, Michigan. Located on the corner of 12th street and Hammerberg road, it has served as a sort of impromptu community billboard, broadcasting everything from birthday greetings to congratulations for various achievements. It has been painted countless times over the years, sometimes while the paint was still damp from the previous visitors. It's usually painted at dusk by a group of kids with a ready-made plan for a hurried job in order to avoid getting busted for tagging graffiti. It's all smiles and giggles for those "artists" painting a happy message.

Of course, there are also the memorials, applied with as much tears as paint with each brush stroke. I don't know who was responsible for this paint job done exactly 21 years ago today, but I do want to thank them for it. It may have been painted over thousands of times since then, but the sentiment and the memories will never fade away. 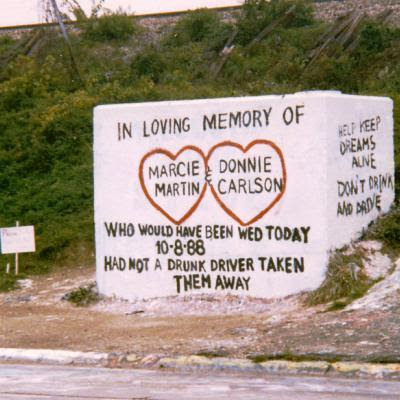 Marcie read the poem below at her sister's funeral in 1976, a sister who was killed by a drunk driver. Marcie met a similar fate 12 years later, killed with my brother Donnie, about two and a half months before their wedding. This would have been their 21st anniversary. This poem is also engraved on Donnie and Marcie's granite headstone.


In the rising of the sun and its going down,
We remember them.

In the blowing of the wind and in the chill of winter,
We will remember them.

In the opening buds and in the rebirth of spring,
We remember them.

In the blueness of the sky and in the warmth of summer,
We remember them.

In the rustling of leaves and in the beauty of autumn,
We remember them.

In the beginning of the year and when it ends,
We will remember them.

When we are weary and in need of strength,
We will remember them.

When we are lost and are sick of heart,
We remember them.

When we have Joys we yearn to share,
We remember them.

So long as we live, they too shall live,
For they are now a part of us,
As we remember them.

Donnie and Marcie - I remember them, and I miss you brother.
Posted by DaBlade at 7:18 AM