David Letterman in Pervert of the Opera

I think I see the origins of David Letterman's idea to build a creepy secret room above his studio in order to score chicks. (Watch at the 2 minute mark).

OK, how spooky is this?
Here is the plot summary of The Phantom of the Opera (2004) from IMDb:

Deformed since birth, a bitter man known only as the Phantom lives in the sewers underneath the Paris Opera House. He falls in love with the obscure chorus singer Christine, and privately tutors her while terrorizing the rest of the opera house and demanding Christine be given lead roles. Things get worse when Christine meets back up with her childhood acquaintance Raoul and the two fall in love. The Phantom decides to kidnap her and imprison her with him in his lair. Raoul is now the only one who can stop him. 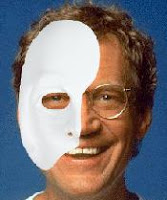 Gap toothed since shortly after birth, a cynical and arrogant comedian known only as Dave lives in the creepy secret bedroom above his television studio in the cavernous Ed Sullivan Theatre. He falls in lust with a "select few female staffers" willing to comply with his private sexual tutoring, while terrorizing and threatening the employment of unwilling staffers.

Back to the Phantom:
The comparison gets a little cloudy from here, so don't quote me. It's been a while since I've seen it, but I believe Raoul attempts to extort a couple of million bucks from the Phantom, threatening to report his shenanigans to the constable. The Phantom turns the table on his blackmailer by going to the constable himself to confess the whole kidnapping and secret lair thingy. He agrees to wear a wiretap, and now it's Raoul who will be singing Music of the Night in a darkened cell corner to a long-haired and tattooed biker known as "Christine". Meanwhile, the Phantom is drawing bigger crowds than ever for his little song and dance (and occasional homicide) routine at the opera House.

As for Letterman, I have no idea what's going on with that whole mess, as I don't follow that asswipe.
Posted by DaBlade at 7:29 AM