Sting: Pharaoh Obama sent by God because of his Islamic background 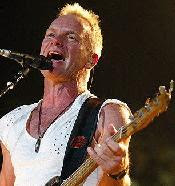 NEW YORK – Sting isn't a religious man, but he says President Barack Obama might be a divine answer to the world's problems. "In many ways, he's sent from God," he joked in an interview, "because the world's a mess."

In any case, I will concede to Sting the fact that Obama was sent by God. I would just humbly remind him that so too were the plagues.
Posted by DaBlade at 8:08 AM