Now the REAL investigation can begin. I have questions and I want them answered immediately! Namely, why did this kid not have the nads to climb aboard before liftoff? It's obvious that is what the dad had planned. I've never heard of a weather balloon with a passenger cab underneath.

Something's not right with this family. Speculation that this was a hoax is growing after little Falcon told a reporter it was all "for the show". Even if this wasn't a hoax perpetrated with full knowledge of the parents, it is my belief they should still be prosecuted to the fullest extent of the law for naming their boy "Falcon".

The balloon boy's father is a known storm chaser, which is another way of saying that he can't hold down a job. It is also reported that Mr. and Mrs. Balloon appeared on the television program WifeSwap, which in and of itself doesn't prove they are white trash media hounds.

However, Chattering Teeth News has uncovered the following disturbing audio...

That's right, "Oxygen is a corrosive gas, in the same family as fluorine and chlorine, hydrochloric acid, hydrofluoric acid". I think I know what little Falcon was doing in the attic for these frantic five hours. HUFFING HELIUM!

In totally unrelated news, a baby wearing an inflatable chef's hat is currently soaring over the Colorado Rockies while his concerned master chef father keeps one eye on the television coverage and the other eye on the oven and his twice baked cheese souffle. 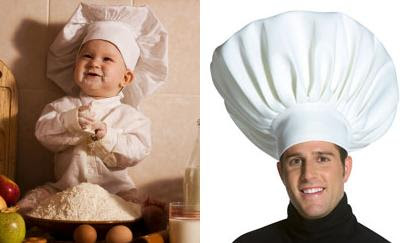 More exclusive coverage from the folks over at iOWNTHEWORLD.com
Posted by DaBlade at 6:05 AM