Jesus came to FORGIVE sins, not to LEGALIZE them

This Sunday, the faithful will celebrate the single greatest event in all of history. No, I don't mean the season finale of AMC's The Walking Dead (although I'm looking forward to it). Nor do I mean the season premier of HBO's Game of Thrones (again, can't wait).

No, this Sunday is all about The Walking Life who is seated at the right hand of the father on His heavenly throne. Easter! Easter Sunday! The resurrection of our Lord and Savior Jesus Christ!


Meanwhile, my FB feed is clogged with these large equal '=' signs, apparently signifying support for "gay rights" as so-called "same sex marriage" is debated at the U.S. Supreme Court. Very sad that this is given top priority by so many during this Holiest of weeks.

That's not to say FB is completely filled with garbage. I did come across this posted pic by a FB friend of mine, and some of the comments were very telling. I just can't even begin to understand how liberals think. My friend's response is brilliant, in my opinion. 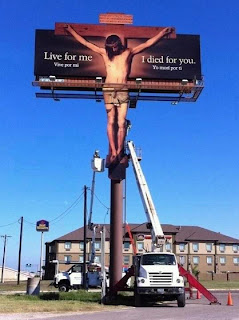 ANON: What purpose does this serve? Do you actually think that non-Christians will become Christians after seeing this?

FRIEND: Not sure this post serves any purpose for most...just thought it was a cool billboard...and maybe to spur people to consider the holiness of this week in particular...Have a prayerful Holy Week my friends.


ANON: No I mean what is the purpose of the billboard?

FRIEND: I would assume the sponsors intend to use the billboard as a means to remind individuals this is the holiest of weeks of the year and help reflect on the Passion and Resurrection. Your thoughts?

ANON: Hmm. I suppose that is good.

If it is intended to recruit new converts to Christianity, I think the messaging fails to achieve that goal given its target audience. However, if the target audience is existing Christians, that concern wouldn't apply.

FRIEND:  I do not belong to a community of believers that are convinced that easily...maybe some faiths/religions can recruit via billboards...the Catholic faith requires a couple more steps than reading a billboard...


Remember fellow Christians (only two quick Bible verses, I promise).
John 3:16 For God so loved the world, as to give his only begotten Son; so that everyone who believes in him may not perish but may have eternal life.

Notice that Jesus did not condemn the adulterer, but neither did He try to make her feel good about her sins. He came to FORGIVE sins, not to LEGALIZE and EMBRACE them.

I think about this story in it's entirety quite a bit. Many times I get angry and clench my fists at the those who attack righteousness and who try to uplift abominations and it makes me want to lash out. Jesus reminds me here that I am not without sin. I am not the arbiter of what sins are most egregious in His eyes, nor do I want that job. The difference, perhaps, is that I do not love my sins. They are stains that only He can cleanse. I would not seek to have my sins accepted or justified by a Godless society. God is my authority. If He is not yours, don't kid yourself into thinking that you don't answer to one. Disbelieving in God and the very busy behind-the-scenes satan doesn't mean you don't align your soul with one or the other.

...and the stone drops harmlessly from my hand.
Posted by DaBlade at 7:56 AM