Should LGBT Corpses be allowed to marry?

Today's blog continues it's mission of linking two seemingly unrelated stories together in hopes of finding that elusive middle ground of compromise and saving the world for the low-informed moderate!

STORY #1
Supreme Court tackles gay marriage
Advocates are starting to line up outside the court and lisping chants of encouragement in anxious anticipation for this week's arguments to redefine marriage in two separate cases.

STORY #2
"Ghost Marriages" in China
The marriage of two dead people in China is a centuries-old custom called "minghun." It involves:
* The family of the deceased male grave robbing for a bride
* A shotgun wedding is performed by a feng shui master (death by shotgun not mandatory)
* and by all accounts -  A "Ghost marriage between two dead people is stable and lasts forever"

China has an abnormal sex ratio because of their "one child" policy and "abortion on demand" (demand of the state) and the overwhelming "choice" for a male baby, so it is sometimes necessary for the groom's family to marry off their dead 87-year-old single grandfather to an 8 month old aborted female fetus.

Hey, don't judge! We are on this same progressive road - just a few twists and turns behind. 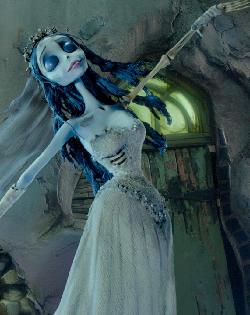 Chattering Teeth Compromise Solution:
Time is of the essence, because when those gay rights activists discover that the court won't render a decision until perhaps June, violent hair pulling and sissy slap fights could erupt in the parking lot. Therefore, for now, the Supreme Court should only allow gay and lesbian corpses to tie the knot. Progressive liberalism is all about incrementalism, after all, so this is the logical first step. Today, married LGBT corpses. Tomorrow, LIVE LGBT marriages... Then I suppose legal marriages between a consenting live gay person and a crusty decomposing corpse. Sure, it sounds disgusting NOW, but who would have thought that mainstream America would ever accept the indiscriminate massacre of their young through 56 million legalized abortions... or accept a Justin Beiber for that matter.

The point is, gay marriage and illegal immigration should be our sole focus in this country, and we should completely ignore the economic destruction and imminent collapse brought upon us by this administration. The young especially need to focus on these "rights" so they don't waste time wondering why youth unemployment is over 25% and why their opportunities have evaporated under obama.