The Secular Progressive Gay Spring Bunny - Hossenfeffer in the highest!

The secular progressives are at it again with their attack on Christianity and an attempt to eliminate references and symbols of faith from public view. First it was "Christmas" being renamed "holiday" - eg: Happy Holidays, Holiday Tree, Holiday lights, etc.

Now "Easter" is their target, removing and replacing the "Easter" with "spring" - eg: The Spring Bunny, Spring Eggs, The Spring Egg Roll, etc. 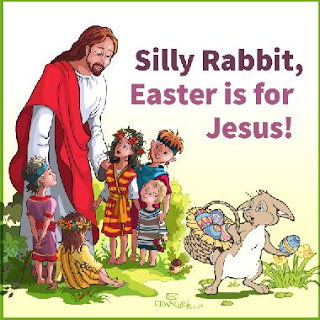 Like that egg-headed elementary school principal in Alabama,  who initially decided to cancel the Easter egg hunt. That is, until parents came out of their shell over the issue causing school officials to reimplement it.

As a compromise, the elementary children were made to put condoms on the eggs during recess while watching a cartoon called, "Humpty the gay egg gets married".

OK, that last part was totally made up.

However, out of concern that the religious connotations of Easter could upset parents and children with differing religious preferences, the Muslim children were allowed to bow out from the Easter egg roll, and instead participate in their traditional Infidel severed doll head roll.

OK, not really, but who knows what tomorrow will bring?
Posted by DaBlade at 8:30 AM