In the original charm offensive, Obama orchestrated a quiet and romantic little candlelit dinner with Republican Senators Lindsey Graham and John McCain at a cost to the taxpayers of about 3 weeks of White House tours. The purpose of this dinner was not for negotiation or any kind of compromise - rather, it was a purely political calculation from Obama that the dinner would provide the right optics to his sheeple in the media and the dumbed-down obamabot voter. 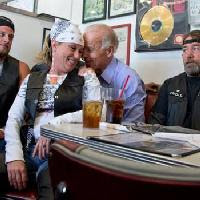 Unfortunately for them, their thunder was stolen. For while McCain was on Obama's lap (like that biker broad in the diner booth with Biden during the campaign) - and Lindsey Graham (in his leather coat, chains and front bangs combed the way BarryO likes them) was playing footsy with both - Rand Paul was making his splash with his filibuster across town.

Now comes charm offensive 2.0?
A freshman? Wow, you’re really classing up the place... I can tell you’re a freshman because you didn’t pay much attention to the State of the Union. (Obarry to Michigan Democratic Rep. Dan Kildee)

"My goal is not to be presidential just for the sake of it," Obama told this Chattering Teeth reporter.

An aloof and arrogant Obama berates, chides, insults and otherwise embarrasses a Democrat politician from my home state of Michigan. Finally, something worthwhile from Obambi. If "not paying attention" to this tool and his empty rhetoric identifies one as a freshman, then mister president, we are all freshman now.
Posted by DaBlade at 7:36 AM