Sequester begins - Lindsay Lohan Released as a way to save money

Department of Homeland Security Secretary Janet Napolitano raised a few eyebrows this past week when she released thousands of previously detained criminal illegals.

But now all agree that the Obama administration has gone too far with the release of a perpetually intoxicated and disheveled Lindsay Lohan back into the wild. 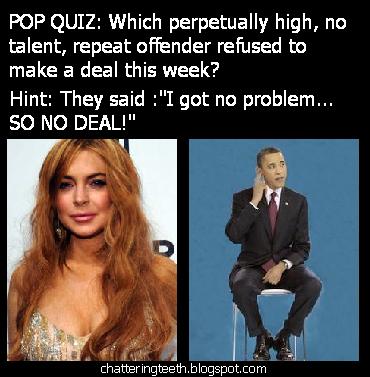 "Like I told you yesterday," said Napolitano, in her patented husky voice, "We deal with a lot of bad actors and we will have fewer agents to do that with."
Just imagine, if all the bad actors in every Hollywood rehab facility are released to an unsuspecting public all at once...!

Apparently, prosecutors tried to trick Lohan with a plea deal this week that would force her to do community service and two months of rehab as penance for her latest drunken car crash last summer.

OUTRAGEOUS! Talk about over reaching by the police. Community service? Queen Lindsay Lohan provides community service just by drawing breath (even when it's thru a breathalizer). TWO WHOLE MONTHS OF REHAB? And just WHAT would you like us fans to do during this period? What if she became sober and discovered she actually had no talent?

You might have better luck convincing obamabots that the continuous 4 year train wreck (and counting) has anything to do with Obama the Magnificent and his destructive policies. Given a preference, this country would be in better hands with a hammered up Lohan in the Oval Office.