According to eyewitness accounts, a young man was walking along this Florida beach not watching where he was going, as he appeared to be texting on his phone. Suddenly, he appeared to trip and stumble, then he just disappeared.

OPERATOR: "911, what's your emergency?"
CALLER: "My friend vanished before my eyes! I think it's another one of them there sinkholes and it must be huge! It swallered him up whole!" 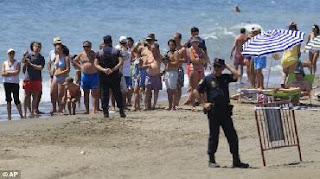 Within minutes, the beach was cordoned off with barricades and police crime scene tape. If not for the heroics of an unnamed sheriff's deputy who risked life and limb by tying a surfboard sideways on his back, then jumping in and pulling them both to safety, the story would have a different ending. 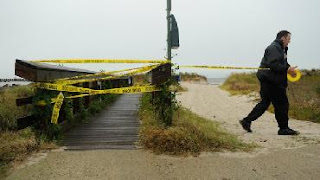 A vacationing Sandra Fluke awoke a short time later from her slumber. Leaning up on her beach towel, she looked around in confusion by the emptiness of the beach for that time of day. She rolled up her towel and grabbed her backpack full of condoms. It was Spring break and she was planning a very busy day.

And now boys and girls, it's time for today's lesson:
Florida's land mass sits on a thick layer of soft limestone that is susceptible to dissolving, creating dangerous sinkholes.

The overwhelming scientific consensus for the root cause of these sinkholes is now assumed to be due to man made global lack of publicly financed contraception.
Posted by DaBlade at 6:48 AM