OBAMA: Speaking to a gathering of mayors at the White House, the president called the lead contamination of golf course irrigation water in Flint an “inexcusable” situation.

I'm paraphrasing, but it's what he meant.

That figure keeps bouncing around in my lead-ladened cerebral cortex. Why does that amount seem so familiar? Of course, living in and around the City of Flint all my life, my brain is so sodden with poisonous lead deposits, my gray matter resembles a 10 lb. tip of a giant #2 pencil.

Ah! The year was 1984. And $80 million you say? THAT just happens to be the exact amount we spent demolishing a perfectly good I.M.A. Auditorium (where millions of folks enjoyed circuses, concerts, graduations, parties, etc, for many years) and in its place erected the Autoworld theme park, an over-sized geodesic green house, complete with a Ferris Wheel, an IMAX theater, and an overhead gigantic model of a car engine that I could stare in awe at for minutes. 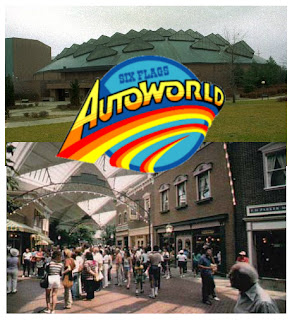 The $80 million was well spent, as it entertained us Flintoids for 6 whole months before the park was mothballed and later demolished.

So now we are getting a windfall of free money (from the rest of the taxpayers across the country who don't HAVE gReat Lakes... suckers!) to fix our lead poison water problems. $80 million, to be exact.

Since Autoworld cost $80 million, and I don't believe in coincidences, I think we can all agree this must be a sign, and that the best use of the money is to resurrect the I.M.A. Auditorium and name it Waterworld. 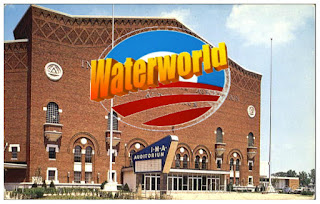 Flint's Waterworld theme and water park would be mostly lead and coliform bacteria-free, and could be a veritable oasis and life-saving source of water (as long as Cher's semis of bottled water keep arriving at the loading docks).

Flint residents would stop by to pick up their Cher water or to do a monthly bathe in the Lazy River turd and tube float.

I can see it now...
When visitors first arrive, they will be greeted by a mannequin in the likeness of Michael Moore. A film will be projected onto the mannequin's face, and the visitor will hear in Michael Moore's own voice the wonders of socialism and reasons why Capitalism sucks and the Cuban health care system is to be emulated.

From there, the tourist can grab some free water and go, or they can stay and catch a wave at the giant wave pool and bar, where Flint residents can relax and enjoy a 40-ouncer from a brown paper bag pool side.

Hey, this could work! Maybe I don't suffer from lead-induced cognitive thought impairment thingys after all!
Posted by DaBlade at 11:25 AM