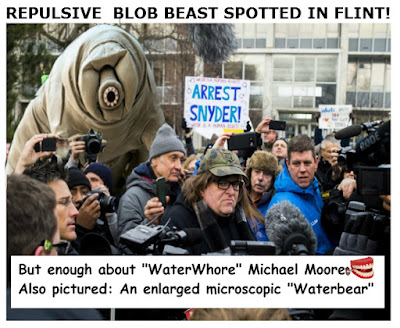 Today's photo creation above features an actual macro photo of a waterbear brought back to life after spending 30 years frozen.


In the center of my photo is the 'unshopped' portion featuring Flint's native son, Michael Moore, also known as a WaterWhore or media piglet. He is large and disheveled, and rouses from hibernation whenever there is a microphone or camera in the area.

Moore was in town yesterday, just a few miles from the Chattering Teeth Bunker Day Spa and Bar. Apparently, Moore chummed the liberal polluted waters with shovels full of his clap trap crap, and even worked in a "George W Bush" slam or two. Man, those never get old! He also shared his letter to obama, pleading with him to come to Flint.

*lip quiver* IF ONLY he would grace us with his planet healing powers! *gasp*

As for the recently defrosted waterbear, he has been busy making a nuisance of himself moving from idiotic protest to protest. 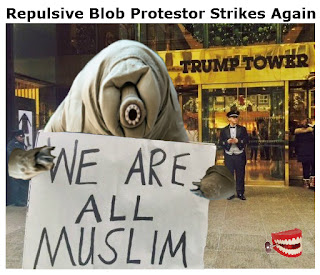