The Ghost of Buddy Holly and the Iowa Caucus: You Won't Believe who he Endorses!

It was a snowy night on February 3, 1959, when a small plane piloted by Roger Peterson and carrying music legends Buddy Holly, Ritchie Valens and J. P. "The Big Bopper" Richardson went down in a cornfield near Clear Lake, Iowa. This coming Wednesday will be the 57th anniversary of "The Day the Music Died".

But that was not the end of their story... 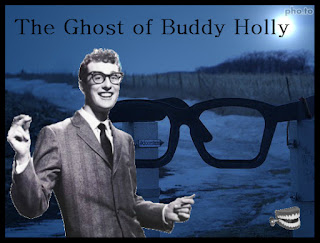 The short and muddled story you are about to skim (or ignore completely before quickly exiting blog) is fiction. A complete fig newton of my machinations and any consumed time dedicated to said drivel is precious time you will never get back. Plus, it has a couple scary parts. You have been warned.

Chapter 1 (relax, it's the only chapter)
It was 10 minutes to midnight when my headlights lit up the large geek glasses at the corner of 315th Street and Gull Avenue in Clear Lake, Iowa. I had finally arrived at the famous Buddy Holly plane Crash Site. Buddy Holly has always been one of my favorite musicians and I wasn't going to pass this way without paying my respects at his final resting place.

The roadside parking spots were empty, given the late hour. I had planned on arriving earlier in the day, but had stopped at a Cruz campaign rally on the way and time just got away from me. The presidential election season officially kicks off on Monday, February 1st, when a few hundred thousand Iowa residents will get the caucus party started. Everything rides on this next election, and I wanted to be here at the start.

I walked down a path leading to the actual crash site, my flashlight illuminating the markers for the four who died in the plane crash there. I shivered from the cold and from the realization of where I was standing. It was here on this very spot and on the edge of this very corn field on February 3, 1959, where and when the music died.

My reverie was broken, and my mood instantly shot from melancholy to terror as a bloated figure unexpectedly appeared from out of the shadows not more than 12 feet in front of me.

The ghoul had a shock of disheveled hair and a lined face with crazy eyes that darted behind black, thick-framed eyeglasses. When he smiled, his  teeth looked like two rows of over-sized tombstones too large for their cemetery. I turned to flee but stumbled and fell, releasing a blood-curdling scream!

"Well, I wasn't expecting you all neither," the apparition stated. 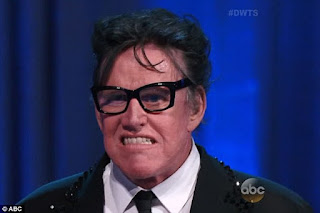 Something about this apparent ghost was strangely familiar and disarming.

"D- d d- do I know you,?" I stuttered, still trying to catch my breath and quiet my racing heart.

"You should. You came to my crash site, after all. Charles Hardin Holley at your service. I am the one and only Buddy Holly in the flesh... well, not exactly in the flesh. I am now a ghost, and I have been tasked with telling visitors here to vote for Donald J Trump this Monday in the Iowa caucus. He will make this country great again, or something."

My mood instantly shot back up to full-throttled horror, and I inadvertently screamed again, this time at the prospect of a president Trump.

The large specter bent down and passed me a 40-ounce malted brew from his brown bag. Against my better judgment, I chugged the rest and was once again sufficiently calm.

"Buddy, what am I supposed to tell the Trump critics who say that Donald is not a conservative, has held progressive views all his life, has been backpedaling on immigration and JUST THIS PAST WEEK bragged about what a great relationship he has with Nancy Pelosi, Harry Reid and Chuck Schumer?"

The spirit just looked at me for a moment. Then he grinned, flashing his tombstones and said, "Tell them 'Boola, Boola."

It was at that moment when my suspicion was confirmed and I knew what had been bothering from the start of this encounter, and why this "ghost" seemed so familiar. 'Boola, Boola' was a memorable line from one of my favorite movies, The Buddy Holly Story, and as far as I know, Buddy never actually said this. If I was right, I wasn't talking to the ghost of Buddy Holly. In fact, I wasn't even talking with a ghost!

I then quickly reached up and removed the iconic glasses from the startled figure and exposing his true identity.

"Just as I figured! It's the actor Gary Busey! Just what are you doing out here in this cornfield?"

Busey's shoulders slouched, as he knew the gig was up. "Mr. Trump is paying me a salary to stand out here and stump for him. He liked the job I did playing Buddy in the movie so he figured I might persuade a few Iowans in my Buddy Holly persona," explained Busey. "I'd like to think he also liked my performance in Dancing with the Stars and my endorsement of him for president."

Just then, a light shined from the heavens, as 3 ethereal spirits descended to stand before us. IT WAS THE REAL GHOSTS OF BUDDY HOLLY, RICHIE VALENS AND THE BIG BOPPER!!!

"Then who do you support?" I asked.

"I'm from Lubbock, Texas, boy! Who do you think I support? Ted Cruz is the man! I predict he will Not Fade Away!"

The ghost of the Big Bopper stepped forward and bellowed, "Hello, baby! I'm from Texas too, and you know what I like! And that's Ted Cruz.

Oh, hey Ritchie. How about you?

"well, I was born in California, not Texas like these other two. And there is no such thing as identity politics in heaven. But... My man Cruz is Hispanic and Trump is just an old, rich white guy," sang Ritchie.

It was at this point when Buddy whispered in my ear. "It Doesn't Matter Anymore."

With that, the three rock and roll apparitions ascended the vault of white light until they disappeared in the sky with a flash, and leaving Busey and me alone in that pitch black cornfield.

"Do you have any more hootch in a bag?," I asked Gary.