A small fixed-wing aircraft pulling this sign caused quite the uproar at the 127th Rose Parade in California. Can you read what this sign says? 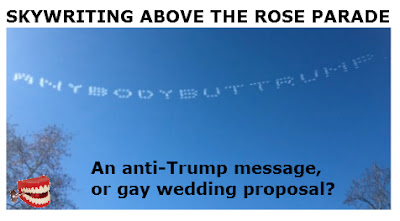 If you believe this is a anti-Donald Trump political ad reading "Anybody but Trump," then you are in the majority. You are also completely wrong. Look at the sign again. Notice how there are no spaces between the words? Remember, this is in CALIFORNIA... and Pasadena is just an Obama-girlie stone's throw to San Francisco.

This is actually a gay marriage proposal that reads:
"ANY BODY BUTT RUMP."

This dude is obviously desperate, as he is advertising that any ol' buttocks will do. Unfortunately, the MSM are so pre-conditioned to hate everything Trump, they made this faux pas (French word meaning "F*%K UP") and now this fella may never find love. If only he would have splurged and forked over a few more bucks for three spaces.

Still don't believe me? It was just two years ago when the Rose Parade hosted the 1st gay marriage on wedding cake float. 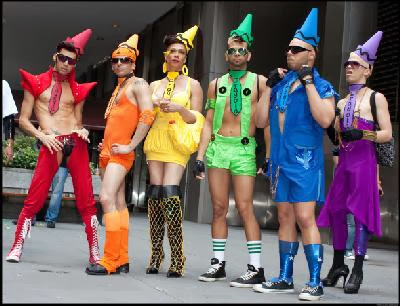 PICTURED: The 2014 Tournament of Roses Wedding Party. How romantic. Hey Percy, do you want to get married on a large Twinkie in the Rose Parade float?


If my memory serves, not using spaces between words was invented by an ancient Greek philosopher by the name of Scriptio Continua. Hey, when you are writing on papyrus scrolls with a hard reed pen dipped in octopus ink, you don't really want to waste papyrus with unnecessary empty space.

The practice ran into disfavor after Scriptio Continua wrote a children's book for one of Caesar's grandkids. It was supposed to be titled, "Children's Laughter". However, "CHILDRENSLAUGHTER" at first blush appeared to read something else entirely.

Scriptio pleaded his innocence to Caesar and almost had him convinced. However, when the book cover was opened to chapter one, things took a turn for the worst. You see, chapter one was supposed to be about a light-hearted kid's trip to the beach to get a tan on the shores of the Mediterranean, but Chapter One's title, "NEEDSATAN" was misinterpreted as something else entirely.