Is Disney Updating the Hall of Presidents With A Meryl Streep Bot Instead of A Trump Bot?

The Hall of Presidents


Unofficial reaction:
Wha!? Disney's presidential robot show is down until the end of June? After Trump won the election, Disney posted that the Presidents Hall of Fame would closed for refurbishments on January 17 through January 29, 2017. Why the 5 month extension? It just so happens that Chattering Teeth News has just received a super secret Russian dossier that seems to explain this sudden change of plans.

Apparently, the Imagineers had already spent 6 months constructing the Hillarybot in anticipation of her election. Day and night was spent in a labor of love by these progressve Imagineers in order to create the most realistic presidential bot to date. It's state-of-the-art animatronics programming called for sporadic and frequent coughing fits, as well as stage stumbles meant to pleasantly surprise the audience. 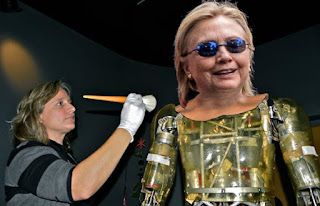 Trump's election changed their plans. However, despite reports to the contrary, they will not be adding a Trump-bot to take center stage. Instead, they will be constructing a Meryl Streep robot that they plan to unveil later this summer.

Unlike the real Meryl Streep, her animatronic counterpart will have actual acting ability - at least that is the Imagineer's hope. The Streep-bot will take advantage of the captive audience by spewing hateful anti-American and communist rhetoric (otherwise known as the democrat platform).