Obama Plans Farewell Speech From Chicago
(This is ONE obama speech I am eagerly awaiting.)

Wait... did he really say that? It's always been about who? 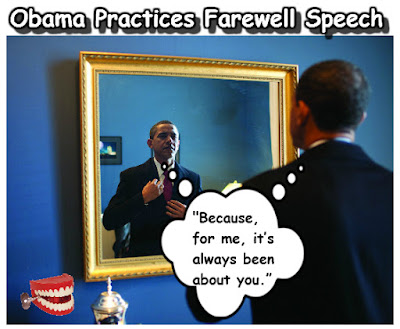 Per a quick google search, Obama used the pronouns "I" and "me" and the adjective "my"--199 times in a speech he delivered in 2014 vowing to use unilateral executive action to achieve his policy goals that Congress would not enact through the normal, constitutional legislative process.

He referred to himself 45 times during his speech at a memorial service in Dallas for the five slain police officers.

Obama referenced himself 119 times when endorsing Hillary AT HER convention.

In fact, it has been documented that "President Narcissism" refers to himself once every 12 SECONDS on average in a 40 minute speech.


By contrast, President Abraham Lincoln’s Gettysburg Address was only 272 words and did not include any form of the first person singular.

Mr. Obama said in the email that he was “just beginning to write my remarks.”

I'm thinking this could make a fun "Over/Under" wager pool. Shall I set the odds at "200" for the number of times Obama refers to himself in this speech? Any "under" takers?
Posted by DaBlade at 9:44 AM