Holes 2 coming to a theater (or North Korean prison camp) near you! 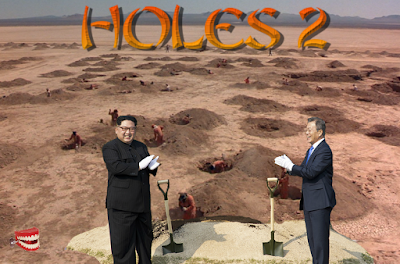 Directed by the original film's child star, Shia LaBeouf, and 100% filmed thru his livestream go-pro camera, the story will follow North Korean leader Kim Jong Un and South Korean President Moon Jae-in as they traverse the North's countryside. Smiling and holding hands, the Korean leaders applaud the citizens as they dig holes and forage for food in the plutonium-rich desert soil. Like the original movie, the sequel also has an ancient family curse as a back story for the inbred dictator from the north - and occasionally Li'l Rocket Boy will pick up a shovel and dig one shovel full but quickly gets winded before he can show his new friend where he buried one of his uncles. Eventually, the Korean leaders tire of LaBeof chanting, "he will not divide us!," and they bury him in a very deep and freshly dug crevice.
Posted by DaBlade at 9:43 AM