Chattering Teeth News - Officials continue to be elusive and tight-lipped about the reason for the weeklong evacuation of the solar observatory near Roswell, New Mexico. Some are speculating the sudden and secretive shutdown has to do with covering up a pending extraterrestrial invasion, an incoming solar flare, or even an inbound Planet X.

Now we are learning that the Weather Channel reporter who was criticized for embellishing the effects of Hurricane Florence is now on site and reporting dramatic high winds at the solar observatory's entrance. 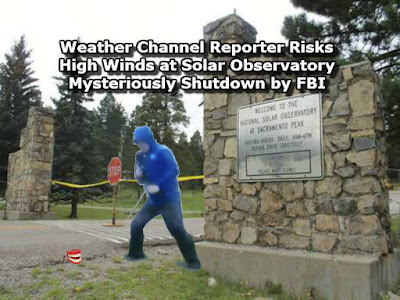 Shortly after this photo was snapped, two Sasquatch reportedly were spotted walking casually by with nary a blown hair on their heads as the weather channel reporter continued to brace for his life. No explanation is being offered by the FBI.