I was just reminded of the 1970's television show, The Six Million Dollar Man. I loved that opening sequence of Lee Major's plane taking the "agony of defeat" end-over-end tumble. Cue announcer guy:

"Steve Austin, astronaut. A man barely alive. Gentlemen, we can rebuild him. We have the technology. We have the capability to build the world's first bionic man. Steve Austin will be that man. Better than he was before. Better, stronger, faster."

What reminded me of this old TV show? 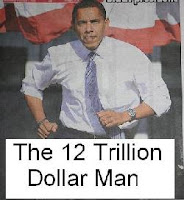 Obama assumes the title role formerly held by Lee Majors. He runs around in slow motion with all his bionic parts making funny sound effects, his teleprompter officially wired to his optic nerve. Obama tackles a new problem each week, only to run in super slo mo to the next one. One week he "fixes" the banking industry. The next week he "fixes" the auto industry. On to health care.

Now that I think of it, this show has already been on the air of every network channel since his campaign. I'd rather watch Sanjaya get attacked by bees honestly.
Posted by DaBlade at 7:08 AM