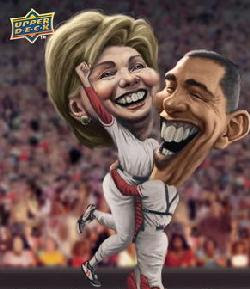 It all started when Hillary fell in the White House basement and fractured her right elbow last Friday while on a secret mission from the president. It ended with successful surgery (or does it?), where doctors are said to have used experimental techniques involving the use of the patient's thigh tissue for joint strengthening.

But did you know the rest of the story?

OBAMA: "I aaaam sensitive to the criticism... thaaaat I had somehow marginalized... secretary of State, Hillary Clinton... sooo I wanted to give her aaaan assignment... thaaaat I knew she was built for... aaaand a critical task with national security implications," stated president Obama to this Chattering Teeth reporter.

HILLARY: "I was just happy the president let me come out of my room at the State Department" said Hillary. "The president had instructed me to come over and run the vacuum and straighten up the basement in preparation for his next toga party, when I tripped over one of his teleprompter cords that are snaked throughout the building like some complex root system."

"Her doctors at The George Washington University Hospital have advised her that they expect her to make a full recovery without lasting damage to her arm," the statement said.

BILL CLINTON: "No lasting damage? That's the understatement of the day. I just made a crack about the backless hospital gown she was wearing, and how she could unilaterally put the North Koreans into full retreat with a full moon over the demilitarized zone. That women is packing some kind of heat now with those thrown ash trays and I can't dodge them now," said former president clinton, through cracked and missing teeth and sporting two black eyes.

Nat's Manager: We're in last place and looking for a boost. Hillary is a little old for a rookie, but I think she could fill the closer role nicely until first round draft pick Drew Storen is ready," said Manny Acta.
Posted by DaBlade at 8:28 AM