a mishmash, hodgepodge, pungent potpourri and flowery bouquet of blog words and other assorted BS 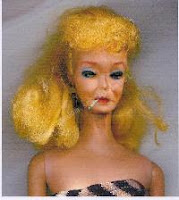 I haven't been blogging regularly as I have been in my secret underground work lab studying the anagrams of "Sonia Sotomayor", searching for hidden meanings. After several days of no sleep and lack of personal hygienne (other than the occasional sponge bath administered by Barbie), I believe I have a lead. Let's just say I find these two suspicious.

I need several more days (and spongebaths) before I am able to decipher the full meaning here, but let's just say that my early prognostificational diagnosis may shock you. new readers - Please don't be intimidated by my prolific use of very intelligent sounding word thingys that can't be found in any dictionary you own. I am, after all, a professional blognosticator.

I'm no economonopolist, but during my lifetime I have had experience with literally hundreds (maybe even thousands) of dollars, so I feel I know what I'm talking about - even if it may appear to the outside observer that I am simply mumbling incoherently to myself. How are they to know that I am conversing with my bikini-clad Barbie, who happens to be in my right pants pocket? She always gets bashful at the beginning of bikini season as she worries it makes her socketed plastic hip joints look inflated. Speaking of which...

Meanwhile, president Barack "Mister Basketball" Obama has been galavanting around the middle east on his latest American apology tour, doling out supplicative bows to arab leaders and dropping to bury his forehead in every prayer rug he struts near.

In the "odd news" department -
Cartman sent me this short email in an apparent attempt to spur me back to the blog...

This has got to be blog fodder somehow.....Gay Penguins Raise Chick Together in German Zoo

I'm sorry, but I am not interested in reading about Crosby and Malkin's down time.

Disclaimer: This is not to make fun of folks suffering from Tourettes, a disease with no f---king cure.

And my favorite... 'Montauk Monster' Mystery May Have Been Solved
Turns out it was the result of a Viking funeral pyre for a racoon carcass on an inflatable child's swim duck. One of the paticipants states, "In the interest of full disclosure, this did happen shortly after a waterboarding endurance competition, and just before a clothespins-on-your-genitals challenge."

If I had a nickel for every time I put water wings on roadkill and set it ablaze and afloat in a local pond...
Posted by DaBlade at 8:42 AM