Obama acting stupidly, so what else is new?

I was gone all weekend for my boys HS hockey tournament and I didn't follow the news AT ALL, and have no idea what, IF ANYTHING, our illustrious president has been up to. That said, and admittedly not having "all the facts", there is no doubt in my mind that Obama has been acting stupidly.

So I am trying to catch up. I see Obama went golfing again at Andrews Air Force Base Sunday. The First Divet has stated that he enjoys golf because it helps him "almost feel normal ... you're out of the container."

Out of the container and left on the counter in the hot sun, mister president?

Oh, and lunch at the turn at the Robin Hood Sandwich Shoppe, which when you think about it, is very apropos. Steal from the producers and give to the non-producers, cuz when you spread the cold cuts around it's good for everyone.

As you can see, golfing at an AFB has it's merits. 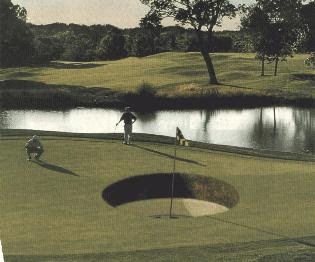 Obama probably falsified a score of 62 on the par 72 course, sacrificing golf rules and etiquette in order to save the game of golf from total collapse or something.

So it looks like Obama's healthcare plan, along with his poll numbers are in a free-fall after his "tough week". I just knew things would start looking up!
Posted by DaBlade at 7:40 AM