Return of the Chattering Teeth

Thank goodness I watched Jack Bauer and '24' last season or I would have been clueless on the air-conditioning ductwork of that big white house and therefore been unable to make my escape. That was actually a week ago. Where have I been since then? Hanging low.

The DaBlade's piled into the Chattering Teeth mobile and we headed north, pulling the weather-beaten 15-year-old popup camper. Mrs. DaBlade had scheduled a visit with Michigan Tech. for our middle boy, so I had the bright idea to turn this into a camping trip.

Pictured below is a roadside thermometer-styled sign that advertises the snowfall amount from the prior year. 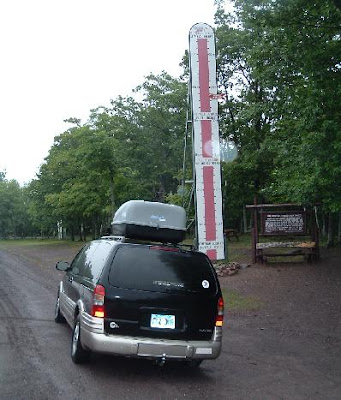 M.T.U. is located in Houghton, Michigan, in the Keweenaw, which is the upper peninsula OF the Upper Peninsula (that large land mass north of the mitten, just this side of the arctic circle). I knew it was cold and snowy in the winter, but how bad could it be in late June and early July? I'll tell you.

Though a little breezy upon our arrival, I was carefree as I set up the camper and adjacent tent with what I thought should prove to be an outstanding view of Lake Superior. However, immediately after completion of camp - the rains came - and came. And the temperature began to drop - and drop. And the winds began to blow - and blow. Gitche Gumee was crashing waves against her rocks as if she were angry at our intrusion.

And so the DaBlades huddled into the camper for the better part of three days, only leaving it's canvassed walls of "safety" for the mad bathroom dash through the bitter winds and driving monsoon of freezing rain. No Hobo pies or S'Mores around the campfire, no water-wings and Budweiser for me in the sun and surf. I went through almost two full tanks of propane just trying to keep the temperature high enough inside the colander camper to keep our blood circulating. It became more a matter of survival than of fun and frivolity. Seriously, it was freakin' cold! It was what I imagine it must be like at the Mt. Everest base camp.

So we did the university tour thingy. The next day was spent doing a road tour of the Keweenaw. Houghton... Hancock... Calumet... Copper harbor... Eagles Harbor. We even did an undergroung tour of the Quincey copper mine, where temperatures are a constant 40-something degrees, just so's we could warm up.

Having run out of things to do, we checked out a day early and headed SOUTH to spend the holiday in Mackinaw City. Never before has a dry 70 degrees felt so good. Our oldest boy turned 20 on July 3rd, so we spent his birthday on Mackinac island riding bicycles, eating fudge, and dodging horse manure piles. The climate at Wilderness State park allowed us to have a few campfires, complete with Hobo pies and S'Mores.

I'm back now and I have no idea what has been going on. Cold turkey from the Drudge Report and the blog roll will do that. Now I feel the pull back to the digital world and I feel the need to once again immerse in the comforting whirlpool of 1s and 0s.
Posted by DaBlade at 6:58 AM