Prom girl Barbies on wheels think out of the box

I have been accused of having a Barbie doll fetish just because I've shared that I keep one in my glove compartment in my car when I'm traveling, and carry her around in my pocket when I'm not. Sure, YOU don't have any minor idiosyncrasies. The relationship is strickly platonic, and if she wasn't such a good listener when we have those probing discussions on politics and pop culture, I might be forced to agree with my therapist you.

That's why this story out of the UK caught my eye: 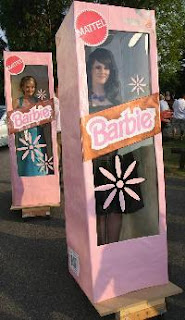 Two teenage girls took the concept of getting all dolled up for the school prom to an extreme - dressing as life-size Barbie dolls and being wheeled in still sealed in their boxes...

To guard against overheating, the boxes were punched with air holes and the girls each had a small fan and a bottle of water...

'We stayed in the boxes for about half an hour. It was really hot and a little scary at first. But we soon got used to it and we kept smiling for everyone while they took pictures of us.'

Well now they've went and done it. I could have told them that their resale value is much higher if they would have been left in their original packaging. These gals would have been the perfect dates for two dudes driving the U-Hauls to the prom, which seems to be the latest trend. Britain's Got Talent for sure!

Apparently jealous of all the attention these two have received, a not-yet identified crazy British woman has been paparazzied in a motorized Barbie-styled box in downtown London. Authorities caution to approach her at your own risk. 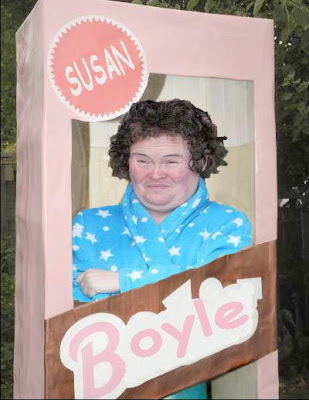