Good news so listen up!
CHICAGO – The King may be dead, but that doesn't mean it's too late to run your fingers through his hair.

Elvis Presley's hair, at least a clump of hair that Presley may have lost to an Army barber when he went into the service back in 1958, is going on the auction block this Sunday at Leslie Hindman Auctioneers in Chicago. 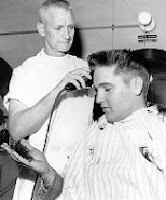 Just some stream of consciousness thoughts as I look at this picture...

I am thinking about placing a bid on these locks, not because I'm some huge Elvis fan, but because I believe it might make a good addition in my latest business venture idea - The Cabinet of Celebrity Curiosities Museum, Gift Shop Bar & Grill. I currently just have in my possession a yellowed Gary Coleman toe nail clipping (it's authenticity sworn to by the local pawn shop dealer), but acquiring this clump of E-hair could really influence the tourist's travel destination plans and jump-start my business.

Before I bid however, I need to know if this hair is from the fat Elvis or the skinny Elvis. Was it saved from a haircut or found in the sink? Did he use conditioners or did he suffer from split ends? Not everyone at this auction will think of all these questions that ultimately affect the hair's value, but that is why I'm one or two steps ahead of the rest.

Apparently this auction will be pushing other Elvis memorabilia from sweat-stained scarfs to Elvis Pez dispensers. These items belonged to a now deceased gentleman named Gary Pepper, who was "president of a Presley fan club" yet claimed to have been a close and personal friend of Elvis. I wouldn't even think to question the veracity of these claims, viewing this clump of hair as proof positive of Pepper and Presley being BFF's. It is widely known that Elvis gave out Cadillacs like candy to regular fans, but would Elvis give a clump of floor-sweepings to just anyone?
Posted by DaBlade at 7:13 AM