Has Bob Woodward been "Taken" by an unhinged Obama on the eve of Sequestration?

A day after receiving a threatening email from a senior person at the White House stating, "You're going to regret doing this", Bob Woodward has disappeared.

According to a senior editor at the Washington Post, nobody has heard from Woodward since his interview with "Blitz" on CNN last night, and he's not answering his cell. It was during this interview, coincidentally, when Woodward stated that Obama has been "showing a kind of madness I haven't seen in a long time."

It is no secret that Woodward has been going "off script" by slamming Obama over the "looming forced cuts" known as the sequester. Doesn't he know that The New Journalist does not question The One with unscreened queries? 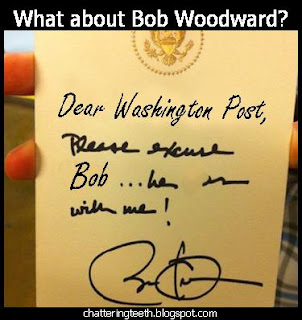 According to an unidentified neighbor who wished to remain anonymous: "Bob had been on edge lately, whispering over the hedges at me to 'watch my corners', stating obama had completely become unhinged and was likely to do anything to retaliate.

I'm glad he warned me, cuz the night before last, a fleet of busses marked Department of Homeland Security pulled up out front of Bob's place at about 2AM. The head bus was being driven by that salt and pepper haired butch biotch, what's her name? Napolean-tano? 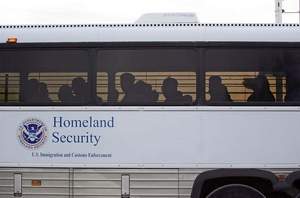 Anyways, when the doors opened, the busses released hundreds of dudes in bandanas and orange jumpsuits clutching AK-47 assault rifles. I'm pretty sure they were them illegal immigrants released from those detention centers we weren't supposed to read about. As Napoleantano sped away, I read a bumper sticker on the back of the bus that said 'Fast and Furious II'".

Oh, not about thwarting foreign terrorist plots from a peace loving al Qaeda. No, no , no! I worry about domestic terrorists like this Bob Woodward character. How can he call himself a journalist and yet defy Barack Hussein Obama's party line?

It's these Home-Grown terrorists who are the real threat,

The funny thing is that the majority of low information obama voters thought that this last election was about freedom to "love whomever you want", but if they step out of line... it's they who will be getting some unwanted "love" from bubba in the re-education camps.
Posted by DaBlade at 8:04 AM