Chattering Teeth in a hoodie

1. How Many Donuts Are in a Baker's Dozen?
2. How many days are there in the 40 days of Lent?
3. How many donuts can be consumed during the 10 minute ride home from Donna's Donuts on Easter morning before projectile vomiting commences?

It was 3AM on Easter morning as the baker pulled into the donut shop parking lot. He was running late and had a lot of work to do in preparation of the 6AM opening. He liked the solitude of these early mornings, so he was slightly startled when his headlights grazed across a lone set of Chattering Teeth in a hoodie huddled by the locked front door...
TO BE CONTINUED 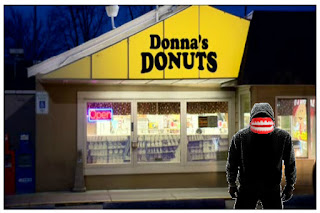 The above short story was a reenactment of an anticipated encounter tomorrow morning. Based on the opening questions, you may have surmised that I have given up donuts for Lent. You would be correct in your surmising, as well as desserts of any kind, cookies, donuts, candy, potato chips and the rest of the salted snack family, donuts...  did I already mention I gave up donuts?

I have never camped out on a Black Friday for the "privilege" of shopping. To me, that would be like arriving to a dentist appointment early (instead of my 10-minutes-late tradition), or better yet - getting to the funeral home before it opens.

In fact, the only times I would get up early to try and be first in line was back in the old days and before online concert ticket sales, when a friend and I would camp out at a Ticket Master location in Flint's northend on the dawn of the latest Jimmy Buffet concert ticket sale. His shows would get sold out within the first 5 minutes, so first in line was a big deal.

Oh sure, there were other outlets in safer parts of town, but the local residents of this particular establishment were more interested in corner crack sales than going to Margaritaville. We were first in line for several years in a row until the internet also killed that golden goose. And what's a flesh wound when weighing against pavilion seating for Buffet's opening show at DTE?

So why are there 13 donuts in a Baker's Dozen?

According to Wonderopolis, no one knows for sure. My own theory involves common core as the leading cause, as well as causing the fall of Rome. Here's theirs...


So if you happen to stop by the house on Easter morning and wonder why there are ears nailed to the 'fridge (and why I am wearing a hoodie), don't forget to ask me for the answer to question 3.