According to my sources here in the spacious Chattering Teeth News Bunker Spa and Grill, the Illinois judge demanded 3 full days of depositions to FIRST prove the premise that Canada is not just a frozen wasteland and that it was scientifically possible that babies could survive birth there.

Once it was established that there was a preponderance of evidence (empty Carling beer cans at various archaeological dig sites) to support the hypothetical that pockets of people are born and actually live there - with all receiving FREE healthcare coverage (but having to travel outside their borders for any actual timely health "CARE") - the next question was to determine if Ted Cruz was one of these... let's call them "Canadians" for lack of a better word for them.

The Illinois judge decided to run Cruz through a series of tests to get to the bottom of this very important question once and for all.

First, Cruz was hooked up to a lie detector and shockingly could not identify even one of the songs piped in through the loud speakers by Justin Bieber, Celine Dion or Alanis Morissette. 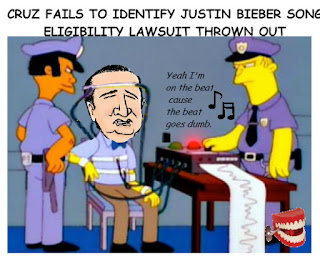 Next, a table of assorted Canadian tuques with tassles and ear flaps were ignored by Cruz in favor of an orange NRA hunting cap found at the bottom of the pile.

Last, the judge had Cruz lace up some hockey skates and he was run through the paces with a semi-sober Canadian Mountie observing. 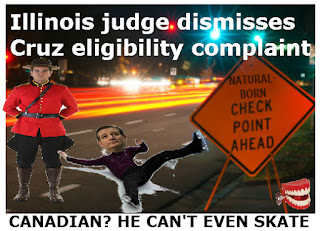 Results? Ted Cruz is most definitely NOT CANADIAN. 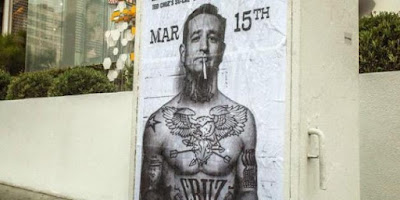 Glad we settled this matter once and for all. In other campaign news...
Ben Carson unsuccessfully tried to suspend his presidential bid yesterday - but reminiscent of the S.C. debate where he stood just offstage for many minutes after his name was called - "he couldn't find a path forward" off his anemic campaign.

Marco Rubio quietly cancels rallies in Kentucky and Louisiana...
"Many are speculating this may be the end of Marco Rubio's bid for the White House."

C'mon, Marco. Do the right thing here. I'll give you some free Flint water if u drop out!
Posted by DaBlade at 7:41 AM