Hey DISPLACED BERNIE SUPPORTERS...
Do you really want to be counter-culture and fight the rich and well-connected? Then jump on the Cruz bandwagon! 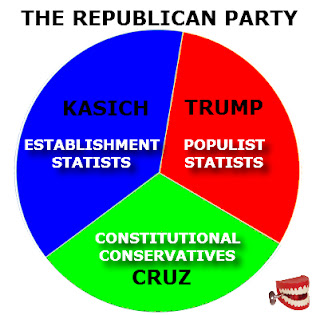 Now that Marco is out of the race the Trumpster might want to buckle up, put his Manhattan Cocktail in a travel sippy cup and give his squirrel's nest another liberal shot of hairspray because the ride is about to get a lot bumpier.

True Christian conservatives have wanted a one-on-one matchup between Cruz and Trump all along. We still have faith in the American people (maybe naively so) that given the choice between a principled conservative in Cruz, versus a populist statist in Trump, that they would do the right thing.

Trump has been happy with his 35-38% support as long as the rest was split among the other 16 candidates in the race.  As candidates have dropped out, Trump has gained very little additional support. Back in October of last year, Cruz was sitting at just 10% in the Polls, well behind Trump. Back then like-minded conservative folks had a choice between Ben Carson, Carly Fiorina, Rand Paul, Bobby Jindal, Rick Santorum and to some extent - even Marco Rubio and Mike Huckabee.

They are all now out, along with all but one of the establishment statists. As far as I am concerned, John "hand puppets"  Kasich may be even better than irrelevant. I believe the small support he gets is drawing away from Trump. I can't imagine any Kasich supporter would join the Cruz coalition.

Let Trump suck on his own medicine now, as evidenced by this:

Ted Cruz has said in his stump speeches, “Washington is looking for solutions for Washington — not solutions that empower citizens across the nation to succeed... Instead Washington solutions invariably help the rich and well-connected.”

It's time to defeat Washington cartel.

Maybe my good friend Andy Dufresne put it best when he said, "I guess it comes down to a simple choice, really. Get busy living or get busy dying."