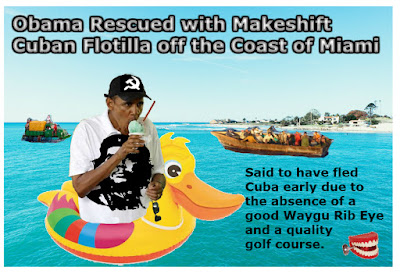 Said to have fled Cuba early due to the absence of a good Waygu Rib Eye and a quality golf course.

CHATTERING TEETH NEWS - The Coast Guard Rescued President Obama and the First Family just off the coast of Miami, Florida, after having traveled 90 miles from Cuba and accompanied by several dozens of Cuban refugees fleeing in rickety boats and homemade vessels built from old car parts and inner tubes.

According to the Coast Guard Captain of the rescuing craft, the USCG Boaty McBoatface, the president was pulled from his rubber ducky pool float wearing a Che T and chewing on a shaved ice snow cone. When questioned about the health of the president, Captain McPoopy Pants said Obama appeared extremely gaunt and drawn, which for him means he appeared to actually have gained a few pounds during his Cuban vacation.

And what a vacation it was, spent with the Cuban tyrant and bashing America's shortcomings:

Captain McPoopy Pants stated that the obama's would likely still be floating in the Atlantic had the rescue helicopter not spotted a huge Mooshell sunning herself on an inflatable barge.
Posted by DaBlade at 7:53 AM