Bill Nye, the science guy, is open to criminal charges and jail time for climate change dissenters
Should climate skeptics should be prosecuted as war criminals? 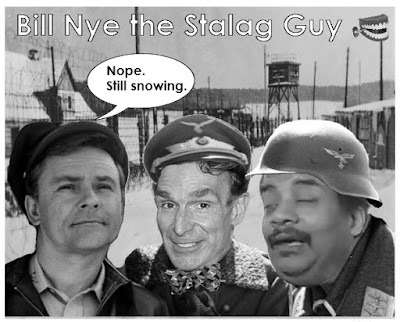 Commander Nye (playfully called "DeNye" by the POWs) is a sadistic and frustrated man who spews nonsense and gobbledygook meant to be passed off as science, meanwhile treating Hogan and the rest of the climate-denier prisoners with cruelty. But Hogan is hardheaded and brave and is not broken by Commander DeNye resisting his torturous TV shows and inspiring his mates in the camp.

Bill Nye The Stalag Guy is filmed in front of a live captive audience where frostbite and hilarity ensues!