CHATTERING TEETH NEWS - John Kasich is being sought for questioning with respect to an overnight ransacking of a soda cooler in a convenience store in Sheboygan, Wisconsin. Store surveillance footage appears to show Kasich in the store just prior to the clerk finding the store's entire stock of Coke and Pepsi products vandalized. 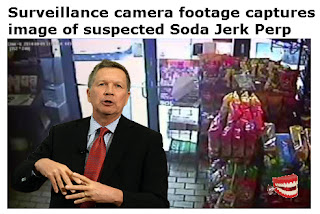 "There was crushed cans and broken bottles of Coke and Pepsi all over the floor and dripping from the shelves," stated the store clerk, who said he was in the john at the time.

This strange crime comes on the heels of yesterday's campaign news regarding both Donald Trump and Ted Cruz calling for Kasich to exit the GOP primary race. The pressure of his 'no win' campaign coupled with his lifelong and bizzare fascination of comaparing himself to soda pop may have finally pushed Kasich over the edge.

At least nobody can say they didn't see the signs.

Back in 1999, when Kasich was running in the 2000 presidential campaign, he described himself in interviews as the Jolt Cola in a market dominated by Coke and Pepsi. Kasich branded himself as "just a little different and a little fresher. More caffeinated, too," as his disheveled pillow-head hair and waving and erratic hand gestures will attest.

Maybe not the worst analogy or marketing strategy, but this off-brand candidate didn't win in 2000, so most savvy politicians might try a different tact in their next campaign. But not Kasich

Back in March, Kasich stated that Marco Rubio had been more hyped than Crystal Pepsi."Even a well-conceived, high-financed marketing campaign won't work if people don't want to buy the product," said Kasich.

Looking back now, it is becoming increasingly clear that John Kasich has not been using an ill-advised campaign marketing strategy using soda pop as analogies. Rather, since 1999 this poor, tortured soul actually sees his fellow human beings as walking, talking and animated cans and bottles of various soda pop and energy drinks.

And yet, he has been campaigning as the only "sane one". His constant mantra in campaign stump speeches has included the following: “If you go out to the grocery store and you get to choose between Coke and Pepsi and some off-brand, most people say, ‘I’ve heard about the off-brand but I just better pick Coke or Pepsi.’”

Well, the good folks in this Wisconsin town won't have the option to pick Coke or Pepsi from one out-of-the-way convenience store. At least not for a few days until a replacement supply truck arrives.

No cans or bottles were harmed in the making of today's blog.

UPDATE: John Kasick has been apprehended! An eyewitness report claims that Governor Kasich was overheard asking: "Have you ever been stopped by a police officer that's an idiot?... I said, officer I, are you kidding, I didn't, I didn't see any, I didn't even see any, where the heck was it? The last thing I would ever do would be to attack my fellow soda cans and bottles of Cola... are you kidding me?"

"He's an idiot! We just can't act that way. What people resent are people who are in the government who don't treat the client with respect," stammered Kasich, as he was roughed, coughed and pushed head-first into the brightly lit squad car.

A major motion picture is now in the works... 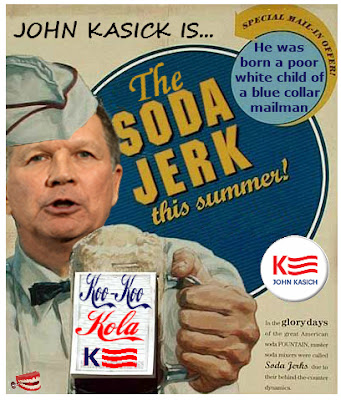