Chattering Teeth News - Just a week after the United States Navy Destroyer USS Donald Cook had a close encounter fly-by with a Russian jet in international waters in the Baltic Sea, they are barrel-rolled by a shirtless Russian President Vladimr Putin on a flying Pegasus. 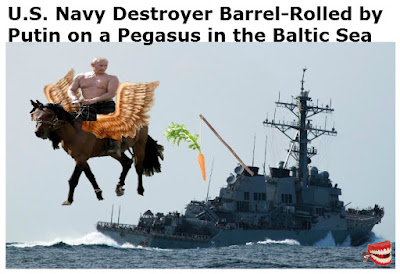 Secretary of State John Kerry described Putin's action as reckless and provocative. "I immediately telephoned President Obama on the secure line in the First Golf Cart," said Kerry. "I told the president that I thought this creature was only a myth. He answered, "No, Putin is real and he's spectacular."

The Captain of the American vessel was then contacted by obama and commended for the restraint he showed with the giant carrot bazooka in this belligerent incident. The Captain answered, "don't mention it. Call any time."

The first mate then explained to the captain that the "belligerent incident" obama referenced had to do with Putin and not obama's phone call. 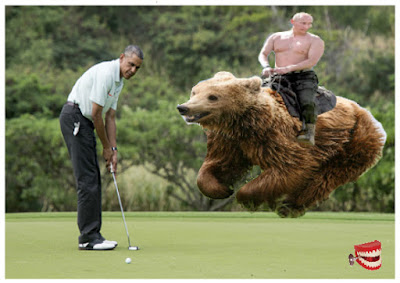