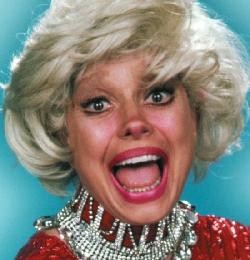 Chattering Teeth News - In what seems to be a parting shot to conservatives, President Barack Obama on Tuesday granted clemency to iconic entertainer Carol Channing just 2 weeks shy of her 96th birthday. Channing is an actress, singer, dancer and comedian extraordinaire with a distinctively exuberant voice who has appeared on Broadway and numerous films.

She is perhaps best known for her starring role in Hello, Dolly!, but has also been called "a gay man’s fantasy figure" and drag queen hero.

This blog has no idea why Germans Love David Hasselhoff, or why Jerry Lewis was so popular in France, but I can take a wild guess as to why the drag queens love Carol Channing - she is a relatively easy woman for a man to imitate. This is probably the reason why Barrack Obama decided to shorten her prison sentence. I imagine Obama donning a wig and standing in front of one of his countless house mirrors while doing an imitation of Carol.

When Channing was asked if she believed if her drag impersonators get it right, she responded, "Every time I see someone impersonate me, I can't help but think I must have a hormonal imbalance. Johnny Depp has said he wants to play me in a movie. Wouldn't that be great? People say, 'But he is a man,' but it doesn't surprise me at all. I can’t remember the last time one of my impersonators didn't have a 5 o'clock shadow."

Obama's love of the drag queens is no secret (He is allegedly married to one). However, this blog has absolutely no idea that this 95-year-old actress was in a high security prison - or what she possibly could have done to land there. I suspect her performances on The Love Boat in the 80s may have finally caught up with her, and...

I am now getting a report that President Obama did not shorten the prison sentence of CAROL CHANNING, but rather some fella named CHELSEA MANNING.

This is embarrassing... This blog has no idea who Chelsea Manning, is, or what team he plays quarterback, but this new information may call into question this post's main assertion that Obama has an affinity for the drag queens, and...

My pet squirrel and blog producer has just shown me a bio and photo of this Chelsea Manning fella. [reading] Blah, blah, blah, and "Chelsea Manning's treachery put American lives at risk and exposed some of our nation's most sensitive secrets..." 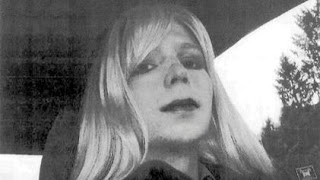 Hmmm. A drag queen responsible for damaging our national security? Sounds like an obama wet dream. No blog correction required. Carry on.
Posted by DaBlade at 7:53 AM